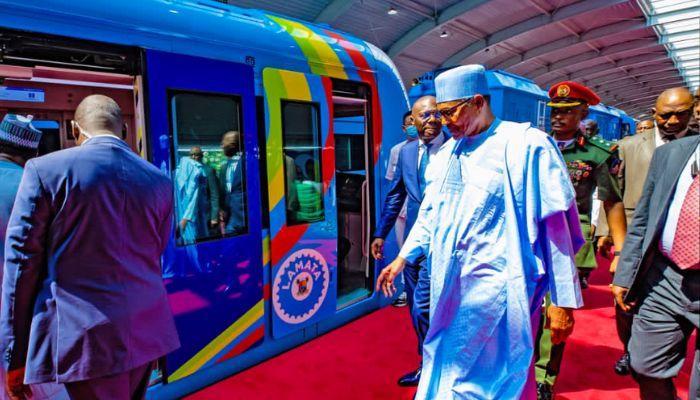 Thirty-eight years after he cancelled a metro rail line project in Lagos when he was the country’s military head of state, President Muhammadu Buhari has inaugurated the 27km Blue Line Rail, the first-ever inter-city light rail system by a subnational government in Nigeria.

Buhari, who rounded off his two-day visit to Lagos on Tuesday, inaugurated the 13km first phase of the Blue Line, one of the six light rails under the Lagos Rail Mass Transportation System. Other projects he inaugurated include the JK Randle Centre for Yoruba Culture and History, Imota Rice Mill and Lekki Deep Seaport.

He also witnessed the signing of the contract for the second phase of the project between the Lagos State government and China Civil Engineering Construction Corporation (CCECC), the contractor, to extend the rail line to Okokomaiko in the Ojo area of the state.

At 12pm, Buhari, joined by Governor Babajide Sanwo-Olu and other top government officials, took a 25-minute ride on the train from Mile-2 to Marina, venue of the inauguration, where he promised a waiver on coaches being brought in by the state government.

With the inauguration, the Blue Line Rail, projected to lift at least 250,000 daily and significantly reduce travel time, is expected to commence commercial operations from Mile-2 to Marina.

The administration of Lateef Jakande, governor of Lagos State (1979-1983), had concluded talks with a Japanese company and a consortium of 19 French companies, Interinfra — each of them first-class companies had been engaged by the state government.

A 10 percent essential contribution of about $70 million was also readied with the expectation of more funding from the Central Bank of Nigeria. Preliminary preparations were ongoing until Buhari, then an army general, came into the picture after a successful coup that terminated the civilian rule of President Shehu Shagari, leading to the beginning of the end of a high-impact project that would have equipped the state to solve the perennial traffic challenge it still faces.

The president’s host at yesterday’s inauguration, Sanwo-Olu, under whose tenure the phase one of the rail system has been completed, was 19 years old when his guest truncated the metro line project of Jakande, first civilian governor of Lagos State (now late).

With an estimated population of 24 million population in 2023, based on the latest revision of the United Nations World Urbanization Prospects, analysts believe that Lagos had recorded enormous losses in the last 38 years owing to the lack of rail mass transit system, a common feature in other mega cities like Johannesburg in South Africa and Cairo in Egypt.

According to a recent report by Danne Institute for Research, a Lagos-based research institution, the state loses about N4 trillion annually as a result of traffic congestion. The amount, the report added, is derived from the culmination of estimated 14.12 million hours lost by Lagosians in commuting to work daily.

The report, titled ‘Connectivity and Productivity Report’, said the amount was derived from the culmination of estimated 14.12 million hours lost by Lagosians while commuting to work every day.

Franca Ovadje, founder/executive director at Danne Institute for Research, during a presentation of the report in 2021, lamented that the growth of Lagos had not resulted in increased productivity due to the challenge of connectivity.

Muda Yusuf, a former director-general of the Lagos Chamber of Commerce and Industry, said in an interview with BusinesDay in 2020 that Lagos was bleeding from poor productivity and low turnaround time as a result of traffic congestion.

“Having tonnes of buses won’t solve any problem if they end up stuck in traffic,” he said. “There is no city as big as Lagos that doesn’t have a functional intra-city rail system. If you are talking about mass transit, the most effective means is rail. It helps productivity. And you know mobility has a way of increasing output because the speed of transactions is much higher. You need effective transport systems to facilitate those things so that they can contribute to growth.”

An average worker in Lagos spends the equivalent of 75 percent of a week’s total working hours commuting, according to a research finding by JCDecaux Grace Lake Nigeria.

Efforts by the government at this time to introduce an inter-modal system that will link rail, road and waterways is, however, seen as a positive development that will reduce the huge economic losses in traffic congestion.

Sanwo-Olu, at the inauguration, described the Blue Line Rail as a milestone in the development of the Lagos rail mass transit and a culmination of several impactful reforms in the state’s transport ecosystem, starting from 1999 when Bola Tinubu came in as governor.

The governor, therefore, urged Lagos residents to own the project, which will reduce travel time, improve the quality of lives of residents and make Lagos a resilient mega city that can compete with others in the world.

Obafemi Hamzat, the deputy governor, thanked President Buhari for providing a conducive environment for the implementation of the project.

“The people come first in all that we do. They are the bedrock of our government. This project is, therefore, all about them. And that is what governance is all about.”

Hamzat, who also praised Tinubu, said, “A visionary leader, Asiwaju Tinubu pioneered the idea of the Lagos Blue Line and many other revolutionary initiatives.

“The Tinubu administration developed the Strategic Transport Master Plan, which laid out the foundation for a network of robust and modern transport infrastructure befitting a 21st century city-state, such as ours.”

In his speech, Zhang Zhichen, chairman of CCECC Nigeria Limited, thanked the Lagos State government for its long-term trust and support as well as moves to ease traffic congestion within the metropolis.