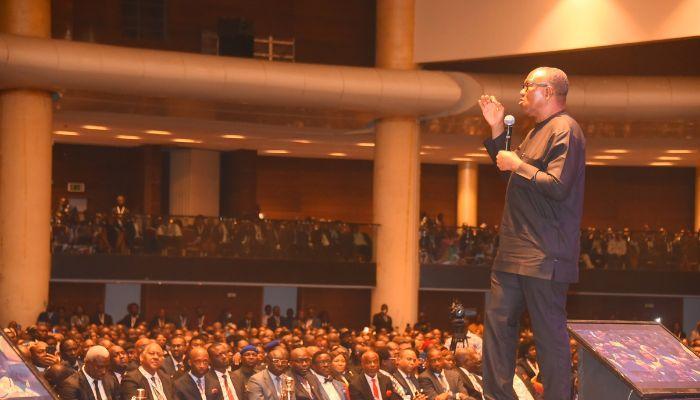 Nigerians have expressed divergent views about Monday’s speeches by the presidential candidates of the People’s Democratic Party (PDP), Atiku Abubakar; Labour Party (LP), Peter Obi as well as the vice presidential candidate of the All Progressives Congress (APC), Kassim Shettima at the Nigerian Bar Association (NBA) conference in Lagos.

At the conference the contestants were unanimous in their beliefs that the economy, security and ecology are slipping to the precipices.

They agreed that the nation needs a competent leader to overcome its woes.

They also unfolded their plans and best ways to salvage the country ahead of the 2023 general elections.

Some noted that the country needed to be restructured for the next president to succeed and for policies to be effectively implemented.

Olasupo Ojo, former national President of the Committee for Defence of Human Rights (CDHR) and current President of Center for the Rule of Law (CENTROLAW), expressed reservation in the plan by the PDP’s candidate, Atiku, to return federal universities to their host states.

Ojo stated that the plan will necessitate outright removal of education from the exclusive legislative list and restructuring of Nigeria into six geopolitical provinces.

According to him,” Each province will then be able to decide to focus on the aspect of education most relevant to their socio-economic development.

“The federal government has no citizens to be educated. Only states and local governments has citizens in need of education. Centralisation of control of primary and post-primary education in the Federal govt prevents diversification of developmental education in all sphere of human endeavour.

“There is need to free the provinces from federal stranglehold without further delay.

This will require tinkering with some statutory provisions starting with the almighty Decree 24 of 1999 (alias 1999 constitution) which is the most singular threat to the wellbeing of Nigeria”.

Ranti AJayi, candidate of the Young Progressives Party (APP), in the recently concluded Ekiti State, gubernatorial election said he would not believe some of promises from the candidates, because some presidential candidates were making the promises just to win the heart of the electorates.

Ajayi, however, kicked against plans by the PDP candidate to transfer federal universities to their host states, adding that such must be accompanied with corresponding financial support to the states.

“I don’t think that’s a good idea across the board. Maybe in some cases, yes. Most of these states are already struggling financially and even with their own state-owned universities.

“The federal government must retain some universities as centers of excellence in education,” Ajayi said.

Also, Omolegan Idowu, lawyer and human rights activists said he was impressed with the intellectual capacity of Peter Obi and his knowledge of the economy, saying he was confident that if voted into power he would salvage the country.

“I never doubted the ability of Peter Obi, you can see the way he was reading figures. He appears to understand the situation the economy. I am more impress with him than the other candidates.

“ The presidential election would be tight and is too early to say who will win, but Obi is that kind of young leader we need now”.

Similarly, some Nigerians who reacted on Twitter, also faulted the capacity of states to handle the burden of federal universities, especially when they have other responsibilities.

“What’s the capacity of states to handle this responsibility? Mr Atiku should fight for autonomy, partial funding and strict standards.

“Quality Education and Public Health are public goods. Let’s set limits on privatization and devolution on these issues,”Seun Onigbinde tweeted.