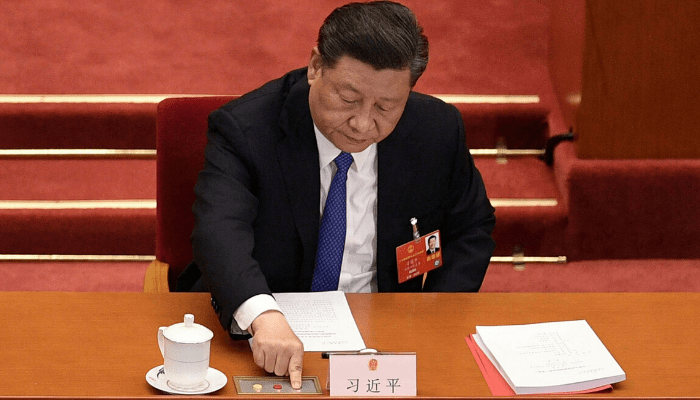 China has formally approved a plan to impose national security laws on Hong Kong, despite a US declaration that the move would signal that the city was no longer autonomous from Beijing.

Mike Pompeo, US secretary of state, on Wednesday issued the Trump administration’s most serious response yet to Beijing’s plan to impose the laws.

China says the laws are intended to target “splittist, subversion of state power, terrorism or interference by foreign countries or outside influences” in Hong Kong. But the move has raised concerns about the city’s future as a global financial centre.
Asked about tensions with the US, Li Keqiang, Chinese premier, told journalists: “We have always rejected cold war thinking and so-called decoupling, which is not good for anyone.”

Shares in Hong Kong tumbled after Mr Pompeo’s announcement, with the Hang Seng index falling as much as 2.2 per cent before paring back some of those losses to close 0.7 per cent down on Thursday.

China’s National People’s Congress, the country’s annual gathering of lawmakers, approved the plan with 2,878 votes for, one against and six abstentions.

A draft of the law will follow in the coming months.

If enacted, the law would represent the first time Beijing had introduced a law that imposed criminal penalties into Hong Kong’s legal code, bypassing the city’s legislature.

China’s decision to pursue the law has reignited protests in the city, with hundreds arrested on Wednesday in Hong Kong’s central business and main shopping districts.

The governments of the US, UK, Australia and Canada released a rare joint statement on Thursday against Beijing’s move, saying it would “dramatically erode Hong Kong’s autonomy and the system that made it so prosperous” and undermine the “one country, two systems” framework put in place after the handover from British to Chinese rule in 1997.  The quartet — a close-knit group of English-speaking countries that shares intelligence but which does not correspond to existing diplomatic groupings such as the G7 — said the legislation also raised “the prospect of prosecution in Hong Kong for political crimes, and undermines existing commitments to protect the rights of Hong Kong people”. It added that it was “extremely concerned” the action would exacerbate already deep divisions in Hong Kong society.

Taiwan denounced the NPC’s move and said it would help Hong Kong people seeking refuge. Tsai Ing-wen, president, said her government had set up a special project to provide financial support and assistance in obtaining residency rights, homes and jobs.
“All of Taiwan across party lines, both the government and the people, stands united to support the Hong Kong people and universal democratic values,” Ms Tsai said in a statement.

Taipei does not have a refugee law and the government has preferred to deal with Hong Kong democracy supporters on a case-by-case basis, in order not to provoke Beijing. But Taiwan’s tone changed following the decision to impose the national security law.
Japan also said it was “seriously concerned”, saying it attached “great importance to upholding a free and open system”, according to a statement from the ministry of foreign affairs. It added that it would “co-operate with other countries to address the situation”.

The US declaration threatens Hong Kong’s special trading status with Washington, under which the city is exempt from tariffs and restrictions imposed on mainland China. This was based on the understanding that Hong Kong would enjoy a high degree of political and legal autonomy for 50 years under the “one country, two systems” framework.

Wendy Cutler, Asia Society Policy Institute
“No reasonable person can assert today that Hong Kong maintains a high degree of autonomy from China, given facts on the ground,” Mr Pompeo said, in a move that threatened the special trading status the US affords Hong Kong.

China’s ministry of foreign affairs said Mr Pompeo’s remarks were evidence of “ulterior motives” to use Hong Kong as “a frontier for secession, subversion, infiltration and sabotage activities against the mainland”. It added that they proved the need for new national security legislation.

But some pro-democracy activists in Hong Kong applauded the US decision. Jimmy Lai, a Hong Kong media tycoon, wrote on Twitter: “Mike @SecPompeo speaks up and speaks the truth about #Hongkong”, adding that the Chinese Communist party “and its puppets will soon face sanctions on them, for violating #HKers basic human rights and freedom”.

Mr Lai is awaiting trial for participating in a peaceful but unauthorised protest last year.

Under US legislation enacted last year, the state department is required to certify that Hong Kong is sufficiently autonomous from China to warrant special treatment.

It was unclear what measures the Trump administration would implement.

“The shoe will soon drop with respect to what concrete actions the US will take in response to Secretary Pompeo’s announcement today on Hong Kong,” said Wendy Cutler, a former US trade negotiator now at the Asia Society Policy Institute think-tank.

Ms Cutler suggested the Trump administration might subject imports from Hong Kong to tariffs. “While this would sound like a major move, it may not have a big commercial impact given the low levels of trade between the US and Hong Kong. However, it could have a chilling effect on business activity, particularly if followed by other actions,” she said.

Critics say Beijing has gradually chipped away at the autonomy enshrined under the “one country, two systems” model. A move to introduce an extradition law that would have allowed criminal suspects to be sent to mainland China sparked months of pro-democracy protests last year.