What the new airfield lights in MMA mean for airlines 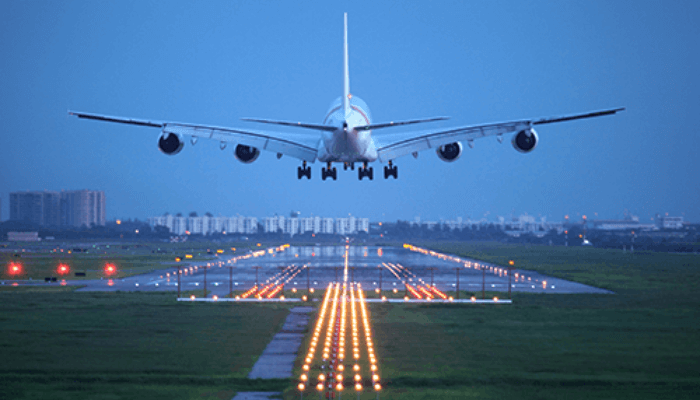 Experts and stakeholders in the aviation sector have explained the benefits of the new airfield lighting recently installed at the Murtala Muhammed Airport, (MMA) in Lagos.

Recall that the runway, technically referred to as Runway 18L/36R was temporarily closed to flight operations on the 8th July, 2022, to allow for the completion of its ground lighting system.

Allen Onyema, the chairman of Air Peace said the installation of airfield lighting on this particular runway will go a long way in alleviating the sufferings of airlines and reducing the cost of operations as well as enhance the possibility of increasing flight frequencies.

Onyema said it will also help reduce turnaround time, which makes for more operational efficiency, and both the operators and passengers will benefit from it.

He commended Hadi Sirika, the minister of aviation, and the Federal Government for the successful installation of Airfield Lighting on Runway 18L/36R at the Domestic Terminal of Lagos.

Onyema congratulated Sirika on the feat and hailed President Muhammadu Buhari for his administration’s favourable policies to the aviation industry.

“I must applaud the Federal Government for successfully installing lighting facilities on Runway 18L/36R. President Buhari has been supportive to the aviation sector and projects like this one are a testament to the fact. One is not oblivious of the strides that have been achieved in Nigeria’s aviation sector courtesy of President Buhari.

With the Airfield Lighting installed, the unnecessary 10-20 minutes spent and fuel burnt when an aircraft lands on the international runway before taxiing to the domestic, will end and generally, it will make for aircraft usage maximisation.

Out of 22 airports managed by the FAAN only Abuja, Port Harcourt, Benin, Enugu, Kano, Kaduna and now Lagos airports have airfield lighting to enable flights to land and take off on or after 6.30pm while others are referred to as ‘Day Light’ airports.

Airlines say when aircraft develop technical issues or there is a weather issue making airlines operate behind schedule, the flight time to these airports may be delayed, which means outright cancellations since airlines cannot operate into these airports after a certain time.

George Uriesi, the chief operating officer, Ibom Air said that the lack of 24 hours flight operations to major routes in Nigeria was impeding the growth of the airlines.

According to Uriesi before the installation of Lagos runway lights, the country’s carriers were losing an average of N4 million per flight, N12 million in every three flights not operated and N360 million in 90 flights and N4.3 billion annually on every flight lost to sunset airport operations.

This restriction, Uriesi noted, has led to a huge under-utilisation of aircraft fleets by the Nigerian airlines as against the global industry standards.

“This is due partly because of too many impediments in the operating environment that limit airline productivity. These include limited runway availability across the domestic network, multiple operational infrastructure deficiencies, poor organisation and many others,” he added.

In a bid to solve the challenge, Uriesi appealed to the government to prioritise airfield infrastructure and provide the necessary Instrument Landing System (ILS) and accompanying accessories for every airport, while also keeping the aerodromes open to meet the needs of airlines and other users.

He also advised that the government should make current, approved master plans a regulatory requirement for every airport and illegalize non-adherence to the master plans by any organisation.

According to Nuhu, Nigeria needs over N1.5 trillion or $5bn billion to fix the airport infrastructure gap in the country according to the African Development Bank (2019) report.