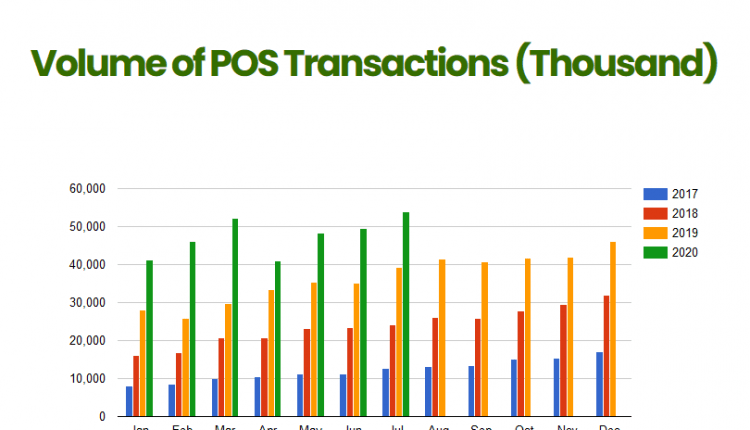 The data released by the Nigerian Interbank Settlement System (NIBSS) in August also means more than 13,000 transactions gained between July and April when it suddenly dropped to 40,859.

The COVID-19 pandemic had contributed to the drop in volume as shown by the numbers in March. Although the volume dropped in January 2020, from a December peak of 46,138.23, the volume regained some of the losses in February and March.

However, the COVID-19 pandemic was declared forcing the government to shut down economic activities and movement. As result shops and malls were adversely affected as customers stayed home. Most of the economic activities were conducted online. But they were not so significant as to sustain the growth momentum built from January to March. Hence, the transaction volume dropped by almost 12,000.

The month of May saw some gains made as the government indicated a willingness to ease the lockdown it had imposed in Lagos, Ogun, and Abuja. However, it was also in May that data from NIBSS showed that the rate of transaction failures was on a steady rise as pressure from online buyers overwhelmed the payment system. The data showed that transaction failures rose to 15.31 percent between 2 and 8 May the week COVID-19 lockdown was eased.

During the lockdown, the Central Bank of Nigeria had urged the banking public to make use of digital payment channels such as mobile banking, internet banking, mobile money, POS, and USSD even as banks were expected to run skeletal services. The CBN governor had promised that efforts would be made to ensure seamless transactions throughout the lockdown, but this was not to be.

The Federal Competition and Consumer Protection Commission (FCCPC) in a statement it issued on 22 April, said it has received a lot of complaints from consumers on issues bordering on failed electronic banking transactions within the period of lockdown.

Apart from growth in the volume of transactions, the number of POS terminals also grew to 548,592 registered representing over 23,000 terminals added from the previous month.