You need to active Javascript on your
Sports BDrecent,Copa America,Euro,Euro 2020,UEFA Euro 2020

Here is what makes the Euros bigger than Copa America

The debate about Copa America vs Euro Cup has been going on for ages and has kept the footballing world divided for years. It is a well-known fact that both Copa America and Euro championships draw fans from all parts of the world who follow the matches passionately.

Both continents create tons of excitement for their respective football viewers and fans across the globe. This leads many to ask the question which tournament is bigger in terms of sponsorships, viewership and parade of stars?

Here, we analyze both leagues to find out which is better.

Rea Also: Excitement builds as Euro 2020 kicks off in days

The Copa America is football’s longest-running tournament which features some of the greatest players in the world.

In Copa America, there are 11 teams that participate in the competition, compared to the Euro, which has an eligibility of 55 teams with 24 competing each time. Based on this it would stand to reason that Euro has a larger following and perhaps even better media coverage.

Also, the fact that the teams that qualify for European Championships need to go through another qualification process, is an indication that the European competition is more competitive and has higher standards with regards to the competency of each team that enters the tournament.

The viewership of both competitions would also favour Euro competition but the Copa America is not far behind.

According to Sony Pictures Sports Network (SPSN) 37 million viewers tune in to watch the entire coverage of the first 21 matches in the group stage of the UEFA Euro 2020 from June 11 to June 18, 2021.

According to BARC data, in terms of average impressions, viewership for the international football championship league was almost three times the viewership of the UEFA Euro 2016.

In contrast, after ten games in the 2021 Copa America, matches on Univision linear networks are averaging 980,000 viewers per game. 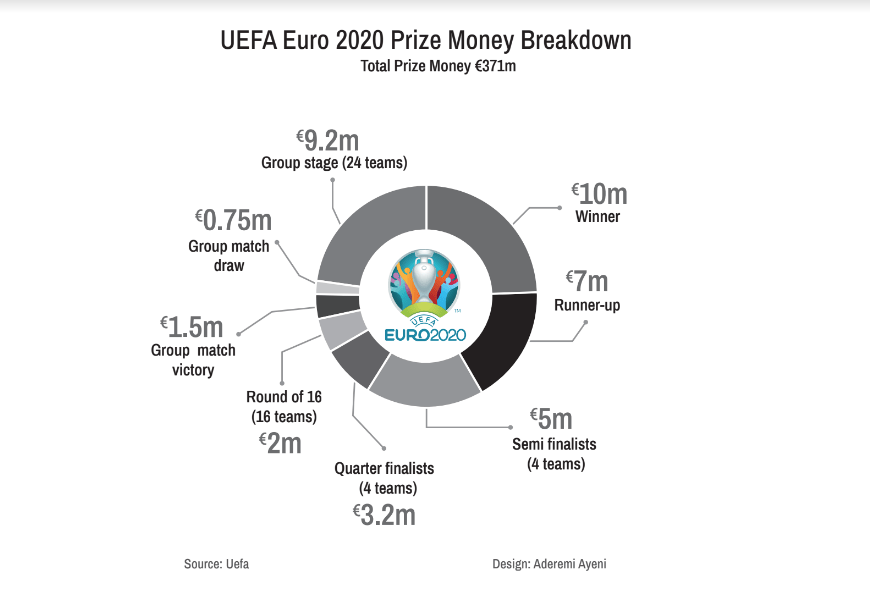 The Copa America boasts of big sponsors from different industries.

Sponsors are essential for the success of the football competitions. While UEFA does not reveal details of individual sponsorship packages, Marketwatch.com found that €483 million (£413 million) of revenue from Euro 2016 came from commercial partners.

The expectation is that deals will increase for the current tournament, with around 25 percent of the revenue generated coming from brands wishing to be associated with Europe’s top players.

Euro is the most significant international tournament outside of the FIFA World Cup with impressive viewing figures across the continent.

From a money perspective the Euros has grown into a cash-cow for the participating countries.

The winning team of Euro 2020 could claim up to €34 million in total. Like other competitions, teams accumulate more money the farther they get in the tournament.

Read Also: Euro 2020 and the victory of pragmatism over economic illiteracy

The winner will take home €10 million on the day of the final, but it will have also accrued several millions more on the way there. As noted, the most a team could leave with is €34 million — that’s only if the cup-winning side was victorious through each of its three group-stage matches before winning each knockout game.

Every team in this year’s competition will receive €9.25 million simply for qualifying, while group-stage wins (€1.5 million) and draws (€750,000) each come with prize money attached. 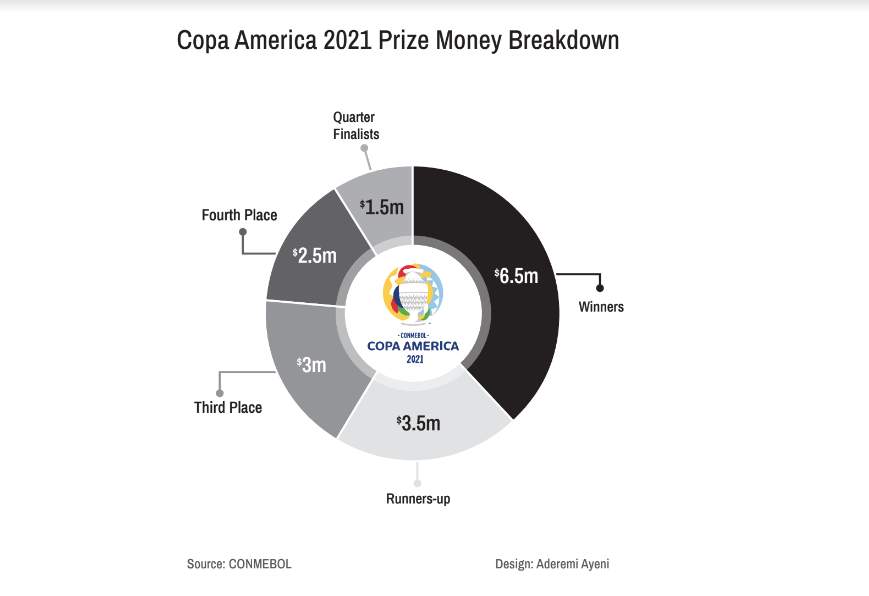 The big money is earned in the knockout rounds, with each stage offering a significant uptick in available prize money:

On the other hand, the total prize money for this year’s Copa America is $23 million as the prize money is distributed amongst the winners, runners-up and participants.

The winning team is expected to get a sum of $10 million for winning the Copa America.

Euro 2020 has been a breath of fresh air across all sports in 2021, financially, that was much needed after the turmoil of the 2020 Covid pandemic.

Both competitions Copa America and Euro cup have exceptional talents with them, with the likes of Cristiano Ronaldo, Paul Pogba, Kylian Mbape, Griezmann, the Copa has Neymar, Messi, Cavani and Suarez.

Securities dealers trade N1.544trn worth of Nigeria’s stocks in 10 months

Innoson wins auto manufacturer of the year at NAJA award