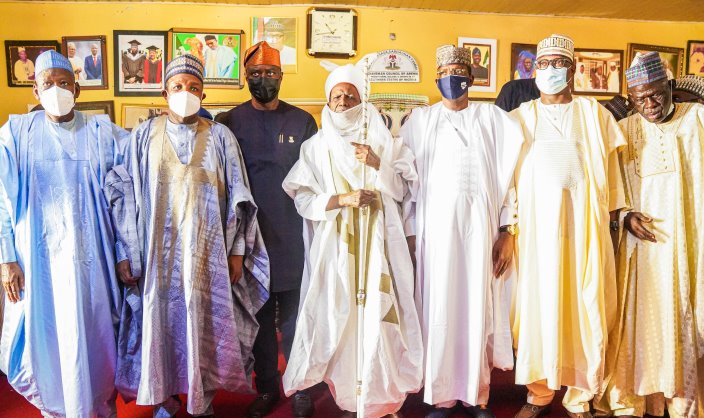 The Nigerian Governors’ Forum (NGF), on Tuesday, promised to help rebuild the Sasa Market, Ibadan, which was burnt down in the wake of the crisis that engulfed the market last week.

A delegation of the NGF led by the governor of Kebbi State, Abubakar Atiku Bagudu, which visited Ibadan, delivered the promise after a tour of the trouble spot.

Bagudu, who was joined by his colleagues from Zamfara, Kano, and Niger States, said that the city of Ibadan was calm, contrary to the pictures being circulated on social media.

He commended the Oyo State governor, Seyi Makinde for what he has done so far in restoring peace and normalcy to the community, adding that the streets of Ibadan are calm and peaceful.

Bagudu said: “We in the Nigerian Governors’ Forum are going to support. As a matter of fact, we have given a token to those who are already displaced, and we will meet at a wider table on Wednesday (today) and can assure that more support will be mobilised.”

He declared that the unity of Nigeria and the need to restore peace were weightier than political divides, adding that his administration was ready to ensure peaceful co-existence among the residents of Sasa community in Akinyele local government area of the state.

While speaking at the palaces of Seriki Sasa and Baale Sasa, the governor called for calm and unity among the Hausas and Yorubas living in the community, urging everyone to join hands with the administration.

He appreciated the governors for coming together to find a way to restore peace to Oyo State and to the country.

According to him, as a government, we will continue to look for an avenue to restore a peaceful co-existence for all of us. Please, I want you to join hands with us and we also acknowledge that sometimes, we process information and we may not get to the roots of the issue. If you see something, say something to us and we will address the challenges frontally.”

The governor explained that his relationship with the Arewa community through the Seriki had been cordial before he became governor of Oyo State, adding that his message to all sides was to give peace a chance.

“Even before I became the governor, I have always had solid interaction with the Arewa community through Baba. I still remember that in 2013, I came here, and Baba was trying to make me feel comfortable.

“So, we have been together for long. I feel the pain of everybody involved here because properties were lost, and we can replace properties. It may be painful, but when the fire started, and I was contacted. I said they should send a fire truck here and the fire truck was vandalised, damaged.

“So, I told the people that it is annoying that we have to use money that could have been used for something else to replace the fire trucks and to rebuild all of these places. But those are minor cases; when a life is lost, we can’t replace it. We cannot make life. So, my message is that of peace.”

Governor Makinde commended the NGF for coming together to identify with the state and to show solidarity with efforts to unite all sides.

“We all have to come together, and I thank my brother governors that have come here, first to identify with us in this period of crisis and also to show solidarity with our efforts towards uniting everybody.

Speaking on behalf of the Nigeria Governors’ Forum after the inspection, Kebbi State governor, Atiku Bagadu, explained that the motive of the governors’ visit was to commiserate with the government and people of the state on the unfortunate incident that led to the destruction of properties in the state.

He called on Hausa, Yoruba, Igbo, and other tribes living in fear to send their community leaders to the Government House, Ibadan, so that the government could address their fears.