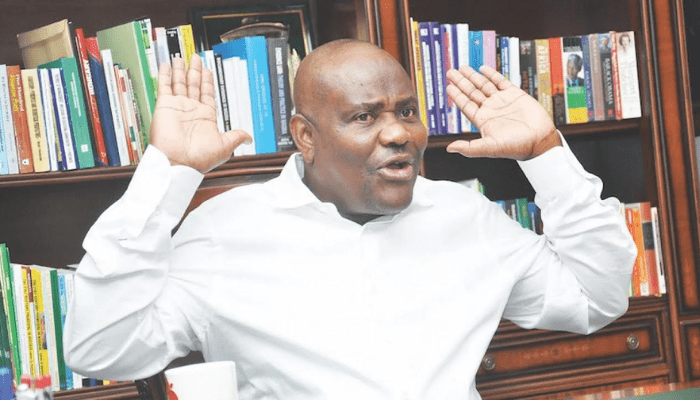 Governor Nyesom Wike of Rivers State has declared the state the safest in Nigeria. The claim did not however seem to go down well with the leading opposition party in the state, the All Progressives Congress (APC), which has told the visiting police boss that the state was far from being what the governor described it to be.

In a statement signed by the Rivers APC spokesman, Darlington Nwauju, the party said its attention was rudely attracted to comments credited to Gov Wike during the visit of the Inspector General of Police, to the effect that Rivers State is the safest state in the country, a claim which they said was very far from the truth. “This statement shows how far the governor is from reality in the state.”

The APC said the governor was making this claim a day after the state capital recorded the brutal and daylight shooting to death of three police escorts before the brazen abduction of the CEO of an oil/gas company on top of the Rumuokoro flyover.

The party said the claim was also coming a day after the abduction of two school children in Elelenwo, and a day after a man was kidnapped at Artillery area of the state capital.

The opposition party said: “That the Garden City is under siege is an understatement. No long ago, people going from Port Harcourt to Degema were daily kidnapped at Emohua. Most communities in the state are under daily attacks and molestation by hoodlums.”

The publicity secretary moved to report to the IG that the area of liberty was worse. “On the side of democracy, freedom and liberty, Rivers State is simply under clampdown. A state where artificial road blocks alien to both the Constitution and the Electoral Act have been willfully constructed against political opponents, cannot be said to be safe. A state where political actors on the other divide cannot acquire party offices, post posters and billboards and freely talk to Rivers people without being chased by hoodlums and political thugs sponsored by the ruling party in the state (PDP) cannot be described as safe.”

He said Rivers State was under the worst form of siege; “Democracy is under threat! Records available to us do not also show proactive response from security agencies to cases of politically orchestrated attacks in different parts of the state.

“Nobody in opposition to the anti-democratic and despotic rule festering in the Oil Capital of Nigeria can boldly claim to be safe or feel a sense of safety.

“A sub-national entity running outside of the Constitution of the republic is a threat to the nation. It is important for all those who have a duty to liberty to act now, and not buy the cover-up that Rivers is the safest state.”

What the IG saw

Gov Wike had handed over to the Nigeria Police the Intelligence and Surveillance Centre that was built by his administration with the sole aim of boosting efforts of the security agencies in crime fighting in the State.

Wike made the hand over on at the inauguration of the Intelligence and Surveillance Centre in Ogbum-Nu-Abali community, Port Harcourt. The inauguration was performed by the Inspector General of Police, Usman Alkali Baba.

The governor said the Centre is fitted with the latest technology and it will help in improving crime fighting capability of police officers and make the State safer.

He noted the need to creating more conducive climate for people in the State to go about their various endeavours and encourage the business community to operate their investment with greater sense of security.

“Let me say clearly, this is our own contribution to making sure we have peace, fight insecurity, and that those who do business and reside here sleep with their two eyes close.”

Wike assured that another Intelligence and Surveillance Centre will be built and donated to the police in the next six months.

Together, the two centres, Wike enthused, that it will be part of the continued support of his administration towards strengthening the capability of the security agencies in their fight against criminality in the State

Gov Wike pledged to purchase and donate 10 more armoured vehicles to the Intelligence and Surveillance Centre to strengthen the performance of officers that will be deployed to the centre.

The governor noted that crime fighting in the State has improved tremendously since the Inspector General of Police was appointed. This is because instead of interfering, he has encouraged professionalism among his officers.

What the IG rather said:

In his speech, Inspector General of Nigerian Police thanked Wike for providing the centre that will enhance the police capability to perform according to international best practice.

“Your excellency, this project is a main boost to my agenda of policing Nigeria in this contemporary time, which is in tandem with providing international best practices of using technology and ICT to police with ease.”

According to him, the entire State capital, Port Harcourt will be under surveillance and monitored within the control room of the centre.

Baba noted that the services to access at the Intelligence and Surveillance Centre will be combined with the police Cyber Crime Unit to render improved policing to Nigerians.

“I want to assure you that police will make use judiciously of this centre in collaboration with our cybercrime unit to tackle all forms of crime and criminality. We will do the needful to discharge our duty as expected.”

The centre, he noted, can also be opened to other security agencies, on the basis of collaboration, synergy and cooperation to achieve real time monitoring of crime incidences and apprehension of the culprits.

“You can sit and police Rivers by getting a live time incident report and you can also have the opportunity to send a team that is on standby at the station. I think this is the international practice we will encourage, and also appeal to other state government and other stakeholders to repeat such project that will make human factor not an issue.”

Rivers State Commissioner of Police, Okon Effiong, said the donation of the Intelligence and Surveillance Centre by the Wike’s administration is another of his outstanding and unflinching support to the police in the State.

He informed that there are about 150 CCTV cameras installed in strategic places across Port Harcourt and connected to the centre to keep the city under the surveillance radar on 24 hours basis daily.

“The Governor had earlier provided for the installation of CCTV security and surveillance cameras at all the entry and exit points in the State. He has also graciously given approval for the installation of cameras in all the major cities in the State. In Port Harcourt for instance, about one hundred and fifty (150) cameras are being mounted. What this translate to is that from this centre the entire State will come under a surveillance radar that will be active 24/7.”

Okon also said that there are 10 sectors into which the state capital has been delimited with dedicated teams that will respond to incidences. According to him, if activities at the crime scene becomes overwhelming, Okong, said, the strike-force team that is on standby at the centre will offer a backup.

Providing a description of the project, the Rivers State Commissioner for Special Projects, Deinma Iyalla said there is a main building where the different gadgets are installed and connected to the control system.

The main building, he stated, also has 17 offices that are well equipped with facilities that will enable the personnel perform in-office duties.