You need to active Javascript on your
News bdothernews,Nigerians

Nigerians worse off than in 2019 – survey

Most Nigerians feel worse about their lives this year compared to 2019 as they continue to experience the brunt of increasing economic hardship.

This is from a survey conducted by Africa Polling Institute (API) to measure citizens’ perception concerning the state of social cohesion in their country and how optimist they are about their future as Nigerians.

This means that most Nigerians are unwilling to cooperate with each other and the government towards the progress of Nigeria. The absence of social cohesion may threaten the peaceful co-existence of citizens.

Social cohesion is defined as the willingness of members of a society to cooperate with each other in order to survive and prosper.

NSCI is derived from the proportion of respondents that perceived ‘average’ and ‘high’ social cohesion in Nigeria, averaged over the 10- Indicators mentioned above.

All interviews were administered between April and May 2021, via face-to-face Household survey, using the Stratified Random Sampling Technique. A total of 8,114 interview contacts were attempted with 5,363 interviews completed, representing a response rate of 66.09 percent. 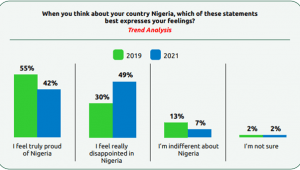 Worse than 2019
API carried out the same survey three years ago and they found that social cohesion in Nigeria has weakened between 2019 and 2021.

“The increasing lack of social cohesion in the country could be plausibly linked to several factors including outright disconnection from the social contract, deep perceptions of inequality, increasing poverty level, high unemployment rate, marginalisation, heightened insecurity, exclusion, amongst others,” the report stated.

There has been a decline in the proportion of Nigerians who say they are truly proud of the nation. In 2019, 55 percent of citizens said they felt truly proud of Nigeria; however, by 2021 this proportion has declined to 42 percent, representing a 13 percent decline.

Similarly, the proportion of Nigerians who say they feel truly disappointed in the country has increased from 30 percent in 2019 to 49 percent in 2021, representing a 19 percent increase.

There’s been a whopping 41 percent increase in the proportion of citizens who would seize an opportunity to emigrate. In 2019, only about a third of citizens (32 percent) said they were willing to relocate with their families out of Nigeria; but by 2021, this proportion has grown dramatically to 73 percent.

On the contrary, citizens who presently feel satisfied with their lives declined by 9 percent from 40 percent in 2019 to 31 percent in 2021.

How Nigerians feel about the future
Finally, in terms of the future expectations for Nigeria, the data reveals that the proportion of citizens who believe that the future of Nigeria will be better, decreased by 7 percent from 66 percent in 2019 to 59 percent in 2021.

However, on the contrary, there was an increase in the proportion of citizens who believe that the future of Nigeria would be much worse than it is today from 15 percent in 2019 to 27 percent in 2021.

The API recommended that there’s need for the Federal Government to create a National Cohesion Commission, one with the crucial responsibility for ensuring that all policies and activities of government have components within them that create a sense of belonging, promotes trust, fosters inclusive governance, and continuously offers citizens opportunities for upward mobility.