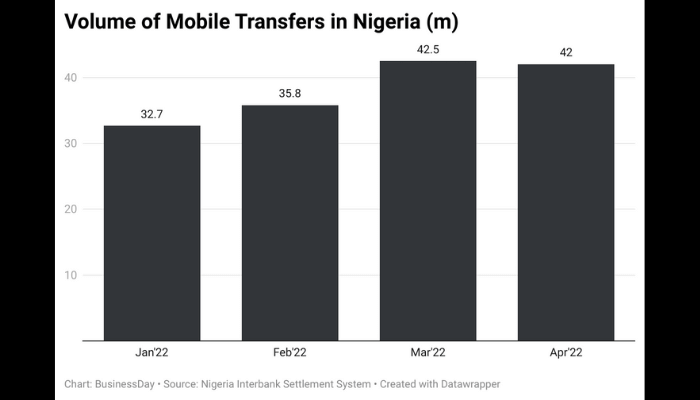 The volume of transactions through mobile devices rose by 128.4 percent to 153 million in the first four months (January-April) of 2022 from 67 million in the same period last year, data from the Nigeria Interbank Settlement System (NIBSS) shows.

Additionally, its value also increased by 172.2 percent from N1.8 trillion as at April 2021 to N4.9 trillion in the same period of this year.

“We now have technology making businesses better and easier. It is also in line with the Central Bank of Nigeria (CBN)’s plan to drive financial inclusion in the country.”

Following the same trend, the volume of Point Of Sales transactions in the first four months of 2022 amounted to about N377 million, a 24.8 percentage increase from what was recorded in the same period of 2021 at N302 million.

In terms of value, it recorded an increase rate of 25.6 percent year-on-year from N19.9 trillion to N25 trillion.

Also, the volume of Nigeria Instant Payment (NIP) platform transactions rose to 1.4 billion in the four months, showing a four percent increase from over 999 million recorded in the same period last year.

Correspondingly, from the NIBSS data, the volume of cheque transactions fell by 12.5 percent to 1.4 billion from 1.6 billion over the same period.

“This shows how consumers are beginning to see the value in the use of electronic channels in carrying out their transactions as well as the advancement in technology as against traditional banking services,” Gbolahan Ologunro, a senior research analyst at Cordros Securities said.

Ologunro also added that financial players in the banking industry have been able to invest a sizable amount in technology infrastructure in electronic channels which has made it less expensive, convenient, efficient and fast over the traditional method of going to the bank to carry out transactions.

In 2012, the CBN introduced the cashless policy which was meant to curb excessive handling of cash and to curtail the volume of cash in circulation.

A report titled ‘Instant Payments- 2020 Annual Statistics’ by NIBSS also stated that COVID-19 had changed the e-payments landscape, and hastened the adoption of instant payments as people switch to electronic channels for funds exchange.

Over the years, NIBSS says Nigerian banks have exposed NIP through their various channels, including internet banking, bank branch, kiosks, mobile apps, USSD, POS, and ATM, to their customers.