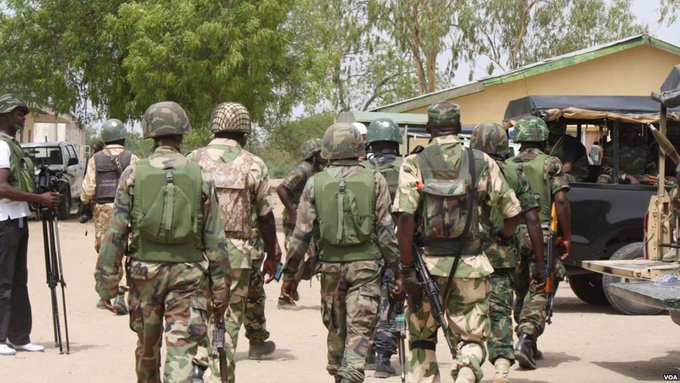 Lawrence Fejokwu, the General Officer Commanding (GOC) 81 Division of the Nigerian Army (NA), has said that the military was ready to collaborate with other security agencies to initiate special operations to check the rising crime in Lagos and Ogun States.

In the last few years, the crime rate in both states, especially in Ogun, has increased, while attacks on remote communities have become widespread.

Attacks by suspected herdsmen on communities in the Yewa Local Government Area (LGA) of the state have led to hundreds of residents relocating to neighbouring Benin Republic.

Recently, the Senate asked the Federal Government to help return residents of Ogun States who have fled to neighbouring Benin Republic as a result of rising attacks in the state.

The lawmakers had said the attacks succeeded because of the almost near absence of police and other security personnel in the affected communities.

But the GOC while receiving the Division’s Defence Correspondents at the Headquarters of the 81 Division at Victoria Island, said that the military was on top of the situation in both states, while urging the residents to share intelligence to security agencies so that they can move before the situation snowballs into crisis.

Responding to a question on possible plans of the 81 Division to prevent possible attacks on government facilities within his area of jurisdiction, the GOC stated that the military in conjunction with other various agencies are working on strategies to contain any attack, but that for the operations’ security reasons he would not disclose the plans.

He assured that soon residents of the two states would start seeing manifestations of significant improvement in the security architecture.

He cited intelligence as the major keys to solving any security challenges as the battle can only be won if the civil populace brings credible information to security agencies.