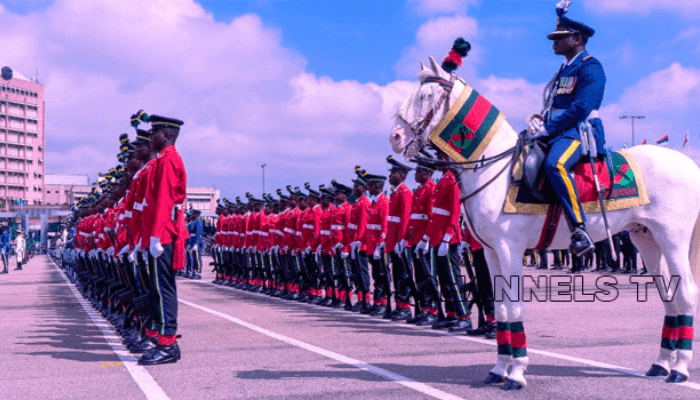 The Federal Government on Saturday rolled out the drums to mark the Nigeria’s 62nd Independence Day anniversary fanfare, amidst the myriads of challenges bedeviling the country, as millions of Nigerians bemoan economic hardships.

Unlike in previous years when Nigerians related with Independence celebrations with excitements, the 62nd Anniversary at the Eagles Square, Abuja, was devoid of the conventional crowd surge and attendance.

Government, not wanting to take risks, had condoned off Eagles Square, venue for the celebration at about 8pm on Friday night, as part of security arrangements.

The event kicked off officially at 10:14am, as President Muhammadu Buhari and other top government functionaries arrived the venue.

The President kicked off the event with inspection of guards, before proceeding to the very important visitors (VIP) stand to observe the parade processions.

This was followed by colourful march past spearheaded by the Army, followed by the Navy, Airforce and the Police.

This was also followed by other para-military agencies that also performed the march past, including the prison service, customs, immigration, fire service, road safety corps, Nigerian legion, and National Youth Service Corps’ members.

All roads linking the Federal Secretariat complex was cordoned off by security personnel.

The Eagles Square itself was scanty as many shunned the event, unlike previous years.

President Buhari had while addressing Nigerians in his Independence Day broadcast earlier in the morning, expressed his sympathy over the growing economic challenges, adding that he shared in the pains Nigerians were going through, even as he commended their “resilience in the face of the rising socio-economic challenges.”

Buhari had also commended Nigerians for giving him the opportunity to lead the country since 2015 and said he had “delivered on most of the promises he made to the people” in the last seven years.

He however, assured that his administration would continue to develop fiscal policies, supported by a robust and contemporary monetary policy that recognises Nigeria’s peculiarities in the midst of the growing global economic difficulties.