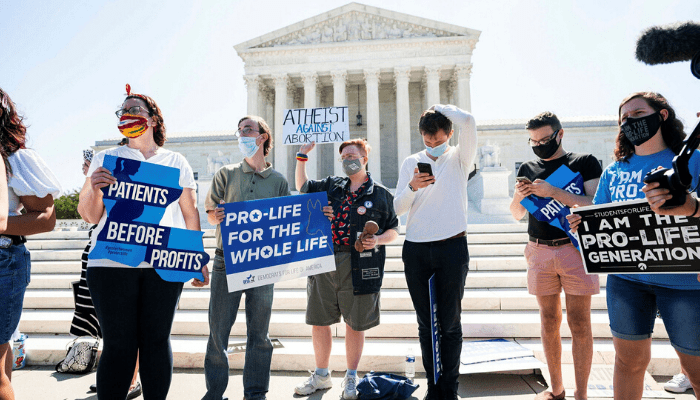 The US Supreme Court has struck down a restrictive abortion law in Louisiana, in a blow for American conservatives who want to overturn Roe vs Wade, the landmark 1973 decision that established a woman’s legal right to an abortion.

In its first major abortion decision since Donald Trump became president, the court ruled 5-4 that a Louisiana law requiring doctors who perform abortions to have “admitting privileges” at nearby hospitals violated the rights established in the Roe decision.

The Louisiana law, which opponents said in effect limited the number of abortion clinics in the state, was near-identical to a Texas measure that the Supreme Court struck down in 2016.

John Roberts, the court’s chief justice who was appointed by George W Bush, sided with his more liberal colleagues in the case, but provided his own legal reasoning in a separate decision.

The ruling, published on Monday, marked the second time this month that Mr Roberts swung the court in favour of his more liberal colleagues. Earlier this month, the court blocked the Trump administration from cancelling Obama-era protections against deportation for 700,000 immigrants. Mr Roberts also sided with the court’s four liberals in that case.

Both self-described “pro-choice” and “pro-life” groups had eagerly anticipated Monday’s ruling on the Louisiana abortion law, given it was the first significant abortion-related case heard by the country’s highest court since Mr Trump appointed two conservative justices — Neil Gorsuch and Brett Kavanaugh — to the bench. Both Mr Gorsuch and Mr Kavanaugh sided with the court’s other conservative justices, Samuel Alito and Clarence Thomas, on Monday in dissenting.