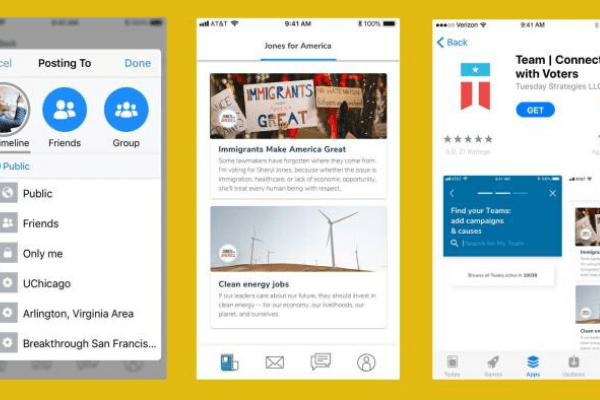 Politicians no longer just want your donation or your vote: they want your contacts book too.

With just a year to go until the next US presidential election, both Democrats and Republicans are developing technology that allows them to nudge potential voters via their supporters’ personal networks, thereby potentially bypassing large social media platforms.

So-called “relational organising” apps, which were first used by the Trump campaign in 2016, are now being used by campaigns on both sides to access the phone contacts of consenting supporters and cross-reference them against voter databases.

Once potential voters have been identified, the app then suggests the supporter send the contact a pre-written message, which is likely to be tailored to what the campaign already knows about them.

According to a study by the Analyst Institute in 2018, the technique has already proven far more effective than other campaign methods, increasing turnout by an average of 2.8 percentage points. The study also found that contact from friends was twice as likely to have an effect as contact from strangers.

Tim Lim, a former Democratic digital adviser, said: “The 2020 campaigns are going to be targeting not just you but your friends. It is not just about who you are, it is who you are connected to.

With experts predicting another extremely close presidential election, both parties are hoping this type of technology could prove a decisive factor. President Donald Trump used such technology in the final few weeks of the 2016 campaign via his “America First” app, and campaigners on both sides say they believe it helped boost turnout in some swing states.

Recent developments in technology mean that campaigners are now able to do far more with such apps, however, including creating messages that are tailored carefully to an individual’s likely preferences, as determined by machine learning.

And with large social media companies increasingly restricting the ways in which politicians can use their platforms and their data to advertise, several are hoping that this will give them another way to do so.

Thomas Peters, chief executive of uCampaign, which made the America First app for Mr Trump, said: “What is driving this is the diminishing returns that campaigns are getting from big social media platforms. Google, Facebook and Twitter are all restricting what political campaigns can do with their data. Having your own app cuts ‘big social’ and gives you direct access to your supporters.”

Michael Luciani, the chief executive of The Tuesday Company, whose app Team is being used by four Democratic candidates, said: “I would expect to see relational organising as a central pillar in any successful campaign in 2020. Email has been the main way to reach voters in recent years, especially for fundraising, but I think we are now hitting ‘peak email’.”