Travellers stuck in US, Europe over airlines’ staff shortage 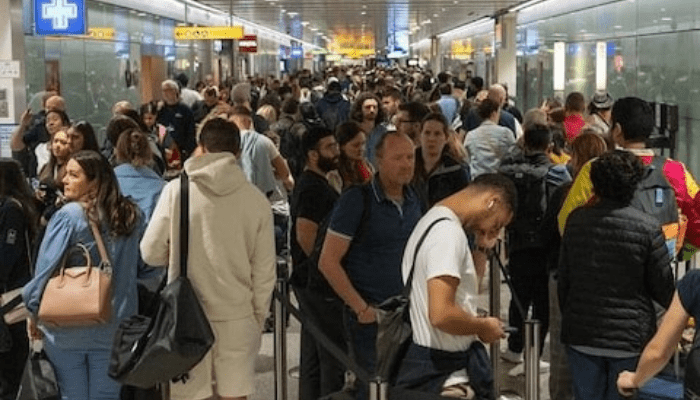 Passengers travelling from the United States and Europe to Nigeria are facing the most difficult times over frequent flight cancellations and delays as a result of staff shortage across airports in Europe.

The long-awaited post-Covid summer travel boom is smashed for holidaymakers as the European aviation industry struggles with staff shortages and labour strikes, forcing airlines to cancel several flights ahead of summer with spiralling effects on flights globally.

In the last few weeks, security agents, ground crews, baggage handlers and other airport workers across European airports began a series of strikes to demand better wages and more hiring.

Lufthansa, a German airline, became the latest carrier to cancel thousands of flights because of staff shortages at airports. The carrier will slash over 3,000 flights to and from Frankfurt and Munich this summer. This follows weeks of disruption at airports across America and Europe.

Airports have had to adjust their schedules as a result of the chaos. London Gatwick announced it would scrap hundreds of flights over the peak summer travel period — hours after Amsterdam’s Schiphol hub took a similar step — because of the deepening staffing crisis.

EasyJet Plc, which operates many routes at those airports, said it would cap flights as a result, suffering an earning hit of £100 million ($123 million) to £200 million. Earlier this spring, British Airways scrapped 10 percent of flights from its timetable through October in a move that it said was aimed at boosting “operational resilience.”

Nigerians scattered across Europe are also finding it difficult to travel back as a result of flight cancellations. The foreign exchange shortage and trapped airlines’ funds in Nigeria has worsened the situation causing airfares to triple from Nigeria to other countries.

Two weeks ago, hundreds of Nigerians at Heathrow airport were stranded after a pilot on Virgin Atlantic flight to Lagos complained the aircraft had technical issues it was trying to resolve.

The airline couldn’t get accommodation for the passengers and another available flight for three days as a result of the strike.

Ebahi Ajayi, marketing executive at Virgin Atlantic, who confirmed the development, said: “We are unfortunately unable to provide accommodation to customers in the meantime, as London Heathrow hotels have very limited availability amidst the weekend peak and scheduled rail strikes. We would like to apologise to customers for the delay and any inconvenience caused.’’

Chinedu Ifediora, a Nigerian student in Germany, said his connecting flight from Germany to London was cancelled, making it difficult for him to travel back to Nigeria from London as scheduled.

Ifediora also hinted that ticket prices have continued to discourage many Nigerian students from coming back for summer because they could not afford to pay almost N2 million for their return tickets.

Kingsley Nwokeoma, president, Association of Foreign Airlines and Representatives in Nigeria, (AFARN), told BusinessDay that anything global will have an effect on Nigerians.

Nwokeoma explained that Nigeria’s populations and frequencies make it one of the biggest markets for the foreign airlines and therefore the strikes will affect travel to Nigeria, especially for passengers connecting flights.

“Since the issue is global, there is little we can do about this but we hope that the strike and all the disgruntled issues are solved very soon,” the AFARN president said.

He explained that because of Nigeria’s Bilateral Air Service Agreement, foreign airlines cannot sell tickets in dollars, but in naira, adding that if other countries are able to repatriate their money, nothing stops Nigeria from doing the same, even if it means sending the money by instalments monthly.

He said: “If the money is not repatriated, how will staff be paid? Monies coming from different countries are paid into a coffer and from that coffer, the airlines pay for their leased planes; they also have operational and maintenance commitments and salaries to pay.

“So if Nigeria is not repatriating, it means it is from other people’s money that even our staff are paid. If it gets worse, airlines may be forced to close shop for a while. This is also affecting the flying public because they are paying more for tickets. If it gets worse, passengers may have to go to Ghana or Cotonou to board flights.”