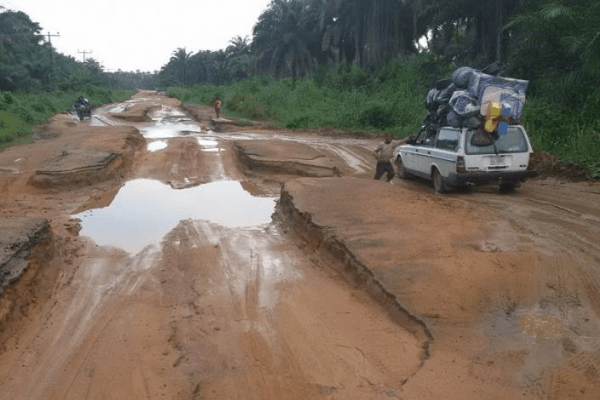 0
Share FacebookTwitterLinkedinWhatsAppEmailTelegram
Business travellers between Akwa Ibom and Cross River have decried the deplorable condition of the Itu-Calabar Highway which links the two states, describing it as a death trap.
They complained that the highway, which was constructed in the mid-1970s, is now impassable in many sections following the onset of the rains.
Speaking in Itu, one of the road users, Effiong Okon, lamented the hardship experienced on the road every week that he travels between Uyo and Calabar.
Okon, a businessman, said that he lacks words to describe the hardship experienced on the road by regular users.
According to him, Uyo to Calabar which used to be a journey of about an hour now takes up to eight hours. Some end up sleeping on the road when there is any breakdown of heavy truck along the road.
“The road users are now subjected to untold hardship, as if they committed sin for being citizens of Nigeria, and coming from this part of the country. Travellers only know when they leave and cannot determine when to reach destination. If you are travelling on the road, you are going with a broken heart because of the tears that will come from your eyes during the trip.Sometimes, one is forced to sleep on the road as trucks fall on each other within short notice,” Okon said.
Another regular user of the road, Ita Asuquo, corroborated Okon’s experience.
“Travelling along this road is not a good experience at all. It is a nightmare coupled with its attendant consequences. If there is an alternative, one will not travel through this road again,” he said.
Reacting to the poor state of the road, the Senior Special Assistant to the President on Niger Delta Development Commission (NDDC), Ita Enang, said the delay was due to funding challenges confronting the Federal Government.
Enang said the Federal Government has requested for funding support from Sukuk bond to finance the completion of the road.
The presidential aide said he had written to the Ministry of Finance and the Ministry of Works and Housing to assist the project with loan from the Sukuk bond.
“Right now we are looking at multilateral sources of funding the road. I have written and I am requesting for funding support from the ministries, from the Sukuk bond through the Debt Management Office, the Ministry of Finance and the Ministry of Works and Housing to help the road with loan from the Sukuk bond,” Enang said.
0
Share FacebookTwitterLinkedinWhatsAppEmailTelegram