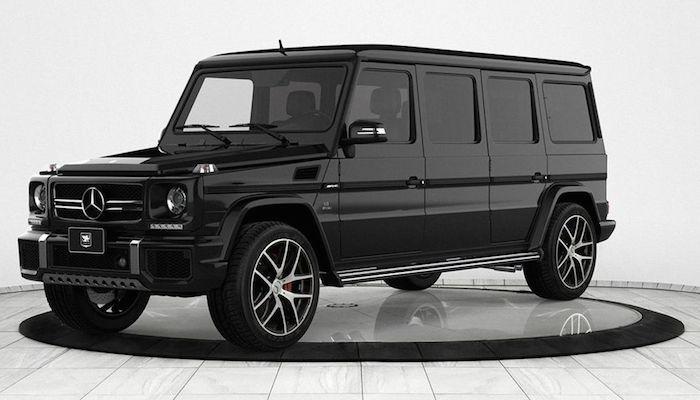 Automakers and their technical collaborators are aggressively taking issues of security especially among the premium and specialised manufacturers seriously. Last year, Inkas; a Canadian firm that recently unveiled an armored version of the current-generation Mercedes-AMG G63 last year is offering a stretch limo version for its discerning and other premium customers with the privileged few, successful corporate executives and typically, politicians and dictators who want more rear leg room.

The 2018 Inkas Mercedes-Benz G63 AMG is a stunning bullet-proof armoured SUV limousine listed at a price of Euros 1 million or about $1.2 million with a 5.5 liter gasoline V8 with a 563 horsepower engine at 5,500 with a permanent all-wheel-drivetrain that comes with a fuel capacity of 96 liters.

It gets a belt of composite armour around its perimeter that can protect against 7.62 millimeter or Winchester .308 ammunition, while the floor can withstand the blast of two simultaneously detonated hand grenades, according to Inkas. The limo also rides on run-flat tyres that allow high-speed driving when punctured, and features ballistic glass and protection for the battery and electronics.

To take passengers’ minds off the threats against their lives, the limousine is equipped with a 4K television that also serves as a partition between the front and rear compartments, Apple TV integration, and reclining rear captain’s chairs with heating, cooling, and massages functions. The armoured car also has a built-in chemical filtration system to ward off biological or chemical attacks.

Because the armoured limo is based on the AMG G63 variant of the G-Class, it features a twin-turbo 4-liter V-8 making 577 horsepower and 627 pound-feet of torque. That will get the stock G63 from 0-60 mph in 4.4 seconds, according to Mercedes, but the extra weight of the stretched and armoured version likely blunts acceleration considerably. An upgraded suspension helps counteract some of that added weight.

This is not the first armoured G63 limo Inkas has built as the company also offered one based on the previous-generation G63. The company also builds armoured versions of other luxury SUVs, including the Lincoln Navigator and Infiniti QX80.

Alternatively, Mercedes is also preparing an armoured version of the next-generation S-Class as part of its Guard lineup billed to debut into the international market later this year as a 2021 model.