The World Bank said Nigeria needs to increase investment in infrastructure and create an enabling regulatory environment for its digital economy ambition to see growth.

A new report by the global economic institution defines the digital economy as the part of economic output derived solely or primarily from digital technologies with a business model based on digital goods or services. The digital economy is made up of various components, including a platform economy, a gig economy, an industry 4.0, a digital economy, data analytics, robotics and artificial intelligence (AI), machine learning, 3-D printing, and e-commerce among others. 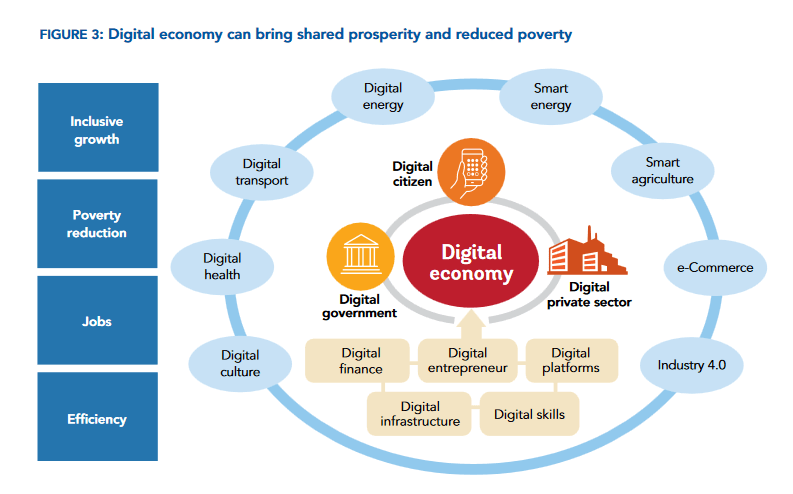 Nigeria’s Social Development Goals (SDG) include greater access to the digital economy by 2030 and creating 100 million jobs. However, the Minister of Communication and Digital Economy, Isa Alli Pantami suggested at a recent e-Nigeria Conference, that the country did not have until 2030 to achieve a digital economy. According to him, the government plans to attain digital economy status by 2023.

But in the Nigeria Digital Economy Diagnostic Report, the World Bank noted that any such plans would have to be backed up with bigger investments in broadband infrastructure to improve penetration. Nigeria’s 0.04 percent broadband penetration rate is below the African regional average of 0.6 percent and far below the global average of 13.6 percent.

The report explains this is due to backbone investment in Nigeria having focused primarily on major urban areas and inter-city routes, and unlike its West African peers such as Ghana and Senegal, Nigeria does not have a national backbone network through which high-speed internet connectivity can be extended across the entire country. As a result, mobile broadband has become the most common and popular way through which people in Nigeria access the internet.

Nigeria’s mobile broadband investment hit 99 percent in the second quarter of 2019 whereas fixed broadband recorded no movement at 0.08 percent where it has remained since the beginning of the year.

The Nigerian minister recently signed a partnership with the UK Government’s Digital Access Programme for a new broadband plan expected to raise penetration level in Nigeria to between 65 percent and 66 percent over the next six years.

“We are working on development regulations, digital integration, building a solid infrastructure, deployment of digitisation and emerging technologies, as well as local content promotion and we,  want all hands on deck,” Pantami said during the conference.

The report acknowledges that Nigeria has made some strides to strengthen the country’s digital space. Nigeria’s Economic Recovery and Growth Plan 2017–2020 (ERGP) recognizes the need for a digital-led strategy to make the Nigerian economy more competitive in the 21st-century global economy. In 2015, the Nigeria Communications Commission (NCC) proposed the transition of the economy into a digital economy through investments in digital infrastructure, and more specifically broadband, which is a key driver of digital economy growth. Nigeria’s international connectivity is well developed, and there are new digital platforms available such as the Central Portal for Government Services.

Nevertheless, tech entrepreneurs who are largely the main drivers of the digital transformation in the country face a lot of challenges including rising business taxes. The Federal Inland Revenue Service (FIRS) the country’s tax collector recently said it plans to tax online purchases on naira-denominated cards beginning next year. This is part of the efforts by the government to diversify its revenue stream for the 2020 budget.

“There is a vibrant ecosystem of digital entrepreneurship in Lagos and Abuja that is supported by the dynamic incubators, venture capital companies, digital start-ups, and the diaspora,” said Siegfried Zottel, World Bank Senior Financial Sector Specialist and co-author of the report. “However, the growth of digital firms is not without challenges, such as a difficult business environment, lack of early-stage financing, and limited market opportunities outside of those cities, which would need to be addressed.”

Nigeria is desperate to raise tax revenue amidst fluctuating oil prices and rising debt levels and its taking measures that are seemingly rubbing off the wrong way on small tech businesses. The measures include an increase in Value Added Tax (VAT) from 5 percent to 7 percent. Also in July 2019, the Nigerian Stock Exchange reintroduced a 5 percent VAT for all transactions on the floor of the platform.

The inadequate regulatory and policy environment including for data protection, cybersecurity, and competition coupled with difficulties in securing funding, is causing many entrepreneurs to close shop and migrate to other countries where they believe the conditions are more welcoming. The report noted that these challenges are barriers preventing potential investments from global technology companies, including those from Silicon Valley.

“As the biggest economy and Africa with one of the largest populations of young people in the world, Nigeria is well-positioned to develop a strong digital economy, which would have a transformational impact on the country,” said Isabel Neto, World Bank Senior Digital Development Specialist and co-author of the report. “Through innovations and investments, the Nigerian economy can harness digital data and new technologies, generate new content, link individuals with markets and government services, and roll out new, sustainable business models.”

The guardrails are finally off