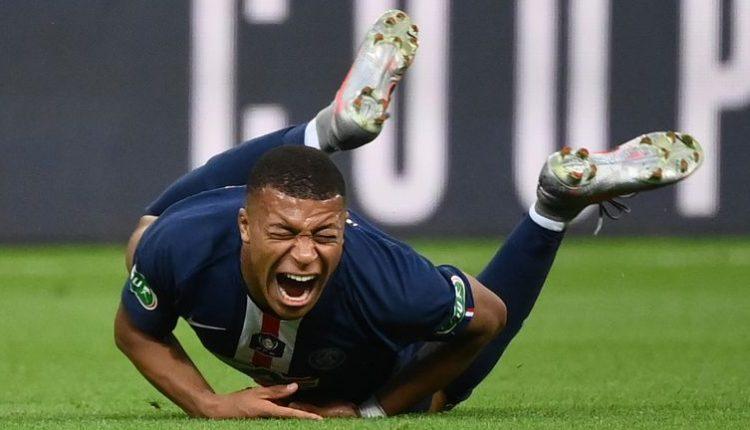 Paris Saint-Germain may have to do without Kylian Mbappe when PSG resume their Champions League campaign  against Italian side Atalanta in August after the  French star striker suffered a sprained ankle during their French Cup final win.

Mbappe was forced to limp off the pitch on Friday after he was brought down by a clumsy challenge from Saint-Etienne captain Loïc Perrin in the 26th minute.

PSG went on to win the bad-tempered final against Saint-Etienne, courtesy of a lone goal by Brazil’s Neymar. But the victory was overshadowed by Mbappes exit.

The French champions face Olympique Lyonnais in the League Cup final next Friday and have a Champions League quarter-final against Atalanta coming up next month.

Friday’s fixture at the Stade de France marked the return of French football after a four-month suspension due to the coronavirus pandemic.

Unlike the rest of Europe’s top leagues, which eventually restarted despite the health crisis, France’s Ligue 1 ended prematurely in March with PSG crowned champions for the seventh time in eight years.

The Qatar-owned club have now won two of a possible four trophies this season, but their real objective is to clinch their first Champions League title.

Despite investing record sums of money to sign the likes of Neymar and Mbappe, PSG are yet to go past the quarter-final stage of the Champions League, European biggest club football’s premier tournament.