With a sizable population, Nigeria offers entrepreneurs humongous opportunities. One of the businesses that thrive on huge population is telecommunications services. At present, Nigeria ranks as one of the leading countries in voice subscription and internet services in Africa. As at September 2019, Nigeria’s teledensity stood at 93.87 percent.

And what comes with that are a number of opportunities for shrewd entrepreneurs. In 2018, Nigeria ranked high on the Global Entrepreneurship Index in Africa, a confirmation of the strong entrepreneurial spirit of Nigerians. Interestingly, the nation’s telecommunications sector contributed 9.85 percent to the GDP in Q1 2018, which increased to 10.11 percent in Q1 2019 and further rose to 11.39 percent in Q2 2019.

With the above sectoral highlights, it is clear that the increasing telecommunications contribution to the nation’s GDP is a clear manifestation of the amount of activities going on in that sector, and how much money is being made by businesses that have positioned themselves at vantage points. When the data is further disaggregated, some states account for most of the gains in the telecoms sector, and by this analysis, we show interested businesses where opportunities exist in the nation’s telecoms sector.

The first point of call is the active voice subscribers in Nigeria which rose to 179.17 million as at the end of the third quarter of 2019. What does that mean? It shows that on a quarterly basis, voice subscribers rose by 2.96 percent while on a year on year basis, the growth rate was 10.58 percent.

Which network and states recorded the highest growth rates?

For MTN, the marginal growth rate in voice subscribers took place in seven states. Sokoto and Lagos states witnessed 4.51 and 4.15 percent growth. It was 3.94 percent in the Federal Capital Territory (FCT) Abuja while in Rivers and Nasarawa, it was 2.38 percent and 2.03 percent respectively. Borno and Kogi states complete the sub national economies where MTN witnessed marginal growth as at the end of the third quarter of 2019. 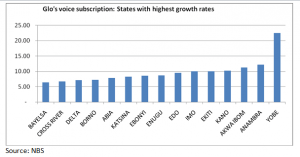 The growth trend in Globacom voice subscription during the reference period raises some pertinent questions: growth rate in Yobe was impressive. However, in the neighbouring state of Gombe, the network operator hardly posted 1.70 growth rate in voice subscription. So, what unique social or economic characteristics separate the subscribers in the two markets?  Same issue will be raised concerning Kano with double digit growth and Jigawa with less than 2 percent growth rate during the period. Which insights could be gained from the demographics in these states that could have been responsible for the disproportionate growth rates in Kano and Jigawa states? Population may not be the only answer. 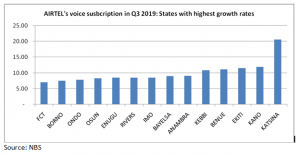 Why does this matter? It is because of the treatment of all the products and services as the same which means customers are yet to start distinguishing products and services. While admitting that both voice and internet subscriptions are complimentary, the fact that each of these services could stand alone makes us to deduce that once customers see a product as good, others from the same company will be treated as such. This explains why the growth rates in voice and internet subscriptions are similar for all the network providers.

In other words, a telecoms firm with better voice subscription services is expected to automatically have better internet services, and vice versa. This does not hold all the time, but based on the data, users of telecoms services in this country are still held up in that belief. Telecoms firms need to start the campaign that will make customers treat their products based on their quality.

Tech and social media giants: the platforms for businesses to thrive

Tech and social media giants: the platforms for businesses…