What new gimmicks does Oshiomhole have to sell Ize-Iyamu to Edo electorate? 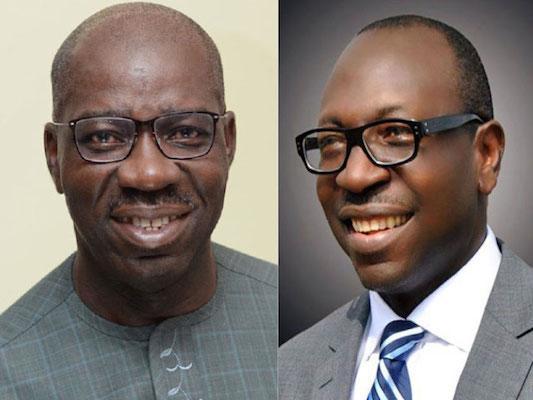 In politics, there are no sentiments. Players employ everything, including slander, debauchery and character assassination to score cheap goals and get to power.

It did not start today. In the family of Isaac, as recorded in the scriptures, the two sons- Esau and Jacob- struggled for a blessing that could make them all-powerful and unconquerable in Israel.

Their mother- Rachel, had positioned her favourite son, Jacob, to get the “vote” from his father, who by virtue of old age, was no longer seeing well. Isaac was tricked into believing that Jacob was Esau and so he poured all the blessings from his bowels on Jacob.

When Esau returned with a sumptuous meal from a game he had hunted to please his father, he was told that all that needed to be said had been said to Jacob. Esau’s profuse wailing and plea for a manufacture of fresh round of blessing only produced a make-belief or fake copy. Isaac told him that what had been said of Jacob has stuck.

In 2016 in Edo State, Adams Oshiomhole, in a bid to sell Godwin Obaseki, so demarketed Pastor Osagie Ize-Iyamu, who was then the gubernatorial candidate of the People’s Democratic Party (PDP), that Ize-Iyamu could not weigh one kobo in the eyes of many voters.

On the strength of his exposé, the then candidate of the People’s Democratic Party (PDP) was roundly defeated by Oshiomhole’s candidate.

Four years down the line, Oshiomhole, who had said all the unprintable things against Ize-Iyamu, is today listed as chief campaigners for the man in the same race he savagely pulled him down at that time. Talk of the “tomorrow is pregnant” allegory!

The question is, what would Oshiomhole be telling the Edo voters this time around? How would he be prancing the podium this time as he did in 2016 to sing the praise of a man he verbally destroyed?

Between 2016 and now, a lot has changed. Whereas Ize-Iyamu was of the PDP and contested the election on that opposition platform, Obaseki was of the APC on the platform of which he contested the seat and won.

Whereas Ize-Iyamu was a sworn political foe at that time, today, he has swapped parties and roles with Obaseki, in dramatic circumstances.

While campaigning for Obaseki in 2016, Oshiomhole, like Isaac, had poured all the blessings he had in his kitty, saying: “God knows that Godwin comes from a large family in Benin Kingdom; he went to school, he finished his secondary school; he went to the University of Ibadan, he finished; there were no issues, he finished in flying colours.

“He went to the US, he did his Masters; he came back home, started helping people to set up businesses. He helped to manage businesses; he helped to set up many banks, including several second-generation banks. I don’t care if Obaseki betrays me at the end of the day; Obaseki’s allegiance should be to the people and not me.”

He did not stop there. Oshiomhole continued: “The oath of office he is going to subscribe to says that he will defend the Constitution of Nigeria; he will do everything to uplift the quality of life of Edo people. Nothing in his oath of office will include ‘I shall not betray my predecessor’ because I have no interest to be betrayed.

“He sits in the Office of the Economic Team which he built using his network of friends inside the heart of Government House without demanding one Naira.

“I know my limit; he knows his limit. Godwin Obaseki has worked for seven-and-half years for the people of Edo State, using his brain, creativity, quietly, not making noise.

“A man like Obaseki who will not ask me to give him contracts, but will promise me, Comrade, you just do the thinking, we will create the means to actualise your thoughts.

“And to his credit today, check the books of Edo State, we did not build new structures in Government House with government money. That economic team office was built through Godwin’s network. Today, it remains a permanent asset of the state government.”

In his I-don’t-care employment of adjectives, Oshiomhole hit Ize-Iyamu below the belt. Of Ize-Iyamu, he said: “By his own CV he was rusticated for two years; his father begged and the school allowed him to do ‘patch-patch’ examination, but could not beg them in Lagos to admit him to the Nigerian Law School. That’s why, although he read law, he is not a barrister”, and that the man’s community service is zero.

He alleged that Ize-Iyamu belonged to some clandestine organisation while in school; bathed a student with acid and got rustication as punishment. He also said that Ize-Iyamu never had any experience aside working with Lucky Igbinedion. First, as personal assistant; second job, GM of one ‘wuruwuru’(company) which, according to him, is dead today.

“Then he became secretary to government to Lucky Igbinedion. It is true we found ourselves in the region of politics working together, but I never gave him government job; I never gave him government job, but other people that I trusted. I kept him busy holding meetings which he’s used to. It’s not a mistake. He begged me to make him the director-general of my campaign. Now, ask him, since he was the DG, why didn’t I appoint him to government? ‘Cunning man dies, cunning man bury am’. I didn’t want to spend my time watching his files; so, I kept him busy; let him be holding midnight meetings where he can tell lies as many lies as he can; while he’s telling lies, I am busy running government.

“Because, if I did not do that, he could have done to me what he did to Lucky. But when he came to me, we kept him away, no access to public funds, and that is how we were able to channel our resources the way that we have done, that today Edo whether you like it or not, it can’t be like before; it can only get better. Look at the road to his house, in our books, was a dual-carriage way; they took the money, they constructed the road near his house, they stopped; can you imagine that? Just to the foot of his gate, the road stopped. Is that the kind of man who wants to lead Edo State?” Oshiomhole pummeled.

In another recorded interview with Channels Television, Oshiomhole had also said of Ize-Iyamu: “I will recommend strongly to PDP to make Pastor their gubernatorial candidate. If they do, we can put any character and we will win. Because we will be testing a well known non-performer…”

It was upon this great endorsement that Godwin Obaseki clinched victory at the gubernatorial election. Nearly four years down the line the former governor of Edo State is singing a new song, which observers say is tantamount to committing political suicide.

In his effort to dismiss the possible backlash of the negative categorisation on his renewed ambition to govern Edo this time around, Ize-Iyamu has said that all that Oshiomhole said about him in the past did not come from his heart.

From the look of things, the voting masses of Edo are anxiously waiting to hear the new adjectives Oshiomhole will reel out to dress Ize-Iyamu when the party’s campaign train berths on the streets of the state, any moment from now.

But we live in a funny, indeterminate world where people’s sense of history is sometimes dim and of curious elasticity. Again, poverty has always compelled many to return to their vomit. But, it is hoped that an average Edo man will not forget Oshiomhole’s antics in a hurry.

If Edo electorates are able to remember yesterday and keep appointment with history, it will be a huge lesson to Great Oshiomhole and other demagogues like him that you do not throw stone into the market because it could fall on anybody who could be your mother, sister or aunt.

Again, it is not wise to mess up the market and go home because whatever took you there the first time could take you back a second time and face-to-face you will meet with your mess.

As FG’s $1.1bn Brazil tractor deal falls through: Indigenous tractor manufacturers insist on ‘piece of the action’ to save local economy