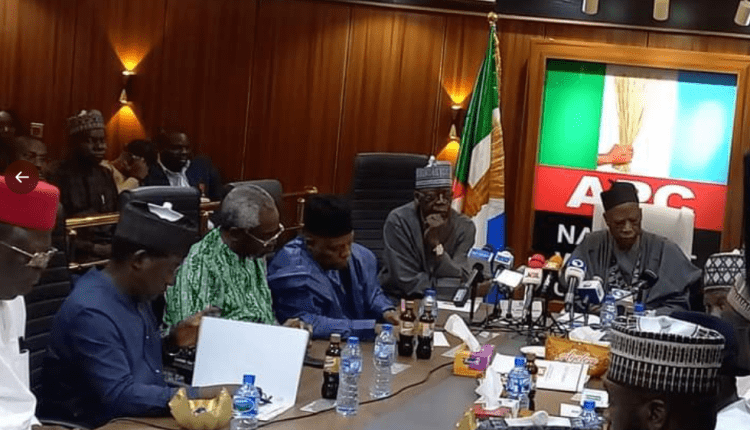 Bola Tinubu, the presidential candidate of the All Progressives Congress (APC) on Wednesday stormed the party’s national secretariat, known as Buhari House and located on number 40, Blantyre Street Wuse 11, Abuja.

This is the first time Tinubu is visiting the APC national secretariat since his emergence as the party’s presidential candidate on June 8; three months ago.

The APC presidential candidate, accompanied by his running mate, Kashim Shettima, Femi Gbajabiamila, speaker of the House of Representatives and other party chieftains was received by Abdullahi Adamu, the party’s national chairman and other members of the National Working Committee (NWC).

The August visitor in September was scheduled to arrive the secretariat at 10am and meet with the NWC at its weekly meeting but he and his entourage arrived at about 3pm.

That notwithstanding, Tinubu, his running mate and others who accompanied him proceeded went ahead with the meeting with the Adamu-led NWC.

BusinessDay gathered that the parley is brainstorm on the strategies to be deployed for the electioneering campaign which kicks off on September 28, amongst other issues.

Speaking before the meeting went into close door, the APC presidential candidate said there was no rift between him and the national chairman who they have come a long way and worked together, adding that campaign council would be discussed at the meeting.

APC Presidential Candidate Asiwaju Bola Ahmed Tinubu and his running mate Senator Kashim Shettima with the National Executive Council Members of the All Progressives Congress led by Senator Abdullahi Adamu at the National Secretariat on a strategic meeting.#BATKSM23 pic.twitter.com/JT8yOIYGp8