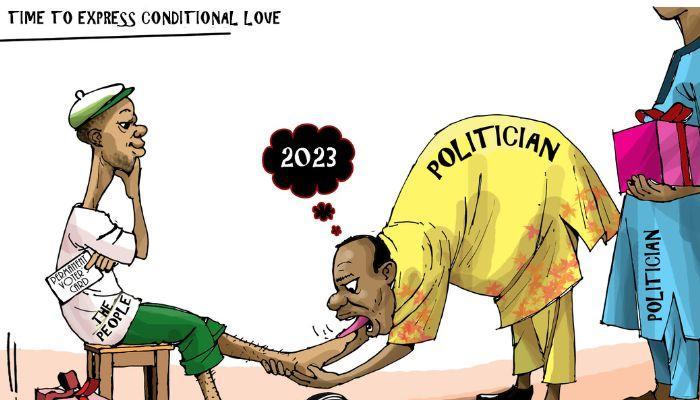 From giving politicians endorsements during elections, a number of Nigerian celebrities are now contesting for political offices.

Funke Akindele, a Nollywood actor and producer of the most financially successful Nollywood film, ‘Omo Ghetto the Saga,’ was recently announced as the running mate to Olajide Adediran, the Peoples Democratic Party’s (PDP) candidate for the 2023 Lagos State governorship election.

“I am not unaware of the cost of this assignment on my vibrant career, which I must now necessarily put on hold. My resolve is that no sacrifice is too much for the actualisation of the urgent mission to rescue our people and our dear state,” Akindele said.

She described the development as an opportunity to help liberate and improve the welfare of the people of Lagos, especially the deprived youth, women, and girl child. She called on youths who are eligible to vote to use the numerical strength to their advantage.

Bankole Wellington, Afrobeats singer and actor, popularly known as Banky W, won the PDP primary ticket for the Eti-Osa constituency in the Federal House of Representatives ahead of the 2023 general election. Following the controversy with his challenger, Sam Aiboni, another primary was conducted two weeks after the first, and Wellington won again, polling 24 votes out of 29 votes cast by the delegates.

Tuoyo Ideh, former Big Brother Naija contestant, will be contesting for the position of member of the House of Representatives representing the Warri Federal Constituency on the platform of the All Progressive Grand Alliance.

Other celebrities who have no intention to run for any office but have shown their support for a presidential candidate publicly include music duo Peter and Paul Okoye, together known as Psquare; Chidi Mokeme, a Nollywood actor and Okey Bakassi, a stand-up comedian.

Some celebrities are sensitising the electorate, especially the youths, to the importance of being more involved in politics.

A video was circulated online recently showing Instagram skit makers and former Big Brother Naija housemates, who are members of YouthsInPoliticsng, sensitising youths to get their Permanent Voters Cards (PVCs) for the 2023 elections.

Micheal Obi Nwabufo, president of Youths In Politics NG, expressed the organisation’s commitment to supporting a new government that will be accountable and carry the youths along in its decision-making.

Music has always been used as a tool to speak about bad governance as the singers use their craft to tell stories of oppression and the suffering of the people. Typical examples include late Afrobeat legend Fela Anikulapo-Kuti, whose protest music of the 70s is still relevant today; African China’s ‘Mr. President’, Eedris AbdulKareem’s ‘Nigeria JagaJaga’, Falz ‘Moral Instruction’ album and Burna Boy’s ‘Monster you Made’.

In March this year, Timi Dakolo came under criticism on social media for singing and endorsing PDP presidential candidate, Atiku Abubakar, during his political rally and declaration to run for the highest political office in the country. Dakolo responded to the criticisms, saying: “I will sing and collect bread, my guy, if it pains you well well, go sing your own.”

In the past, musician Olamide performed during Akinwunmi Ambode’s governorship campaign while Davido threw his weight behind Muhammadu Buhari during his campaign in 2015.

In October 2020, young celebrities and other youths marched to the streets during the EndSARS protest to demonstrate against police brutality and poor leadership. Music was employed as a means of expression during the demonstration, which lasted for roughly two weeks, fostering a bond among the protesters.

These influencers and celebrities attracted crowds to the protest, thanks to their large followings on social media platforms like Twitter and Instagram, demonstrating the potency of social media in the world of politics.

Young Nigerians on the 11th of June defied the heavy downpour to sing and dance along with performing artists, celebrities, and influencers at Tafawa Balewa Square in Lagos for the ‘Youth Vote Count’ Mega Concert 2.0, with free gate passes to only people who had a PVC or a registration slip.

Officials of the Independent National Electoral Commission (INEC) were also present at the venue to register people who did not have a voter’s card and continued the exercise for five days.

Youths in Abuja were not left out as the Old Parade Ground hosted the same celebrities with an additional act featuring Ice Prince, Cobhams, and rapper Phyno on June 25.