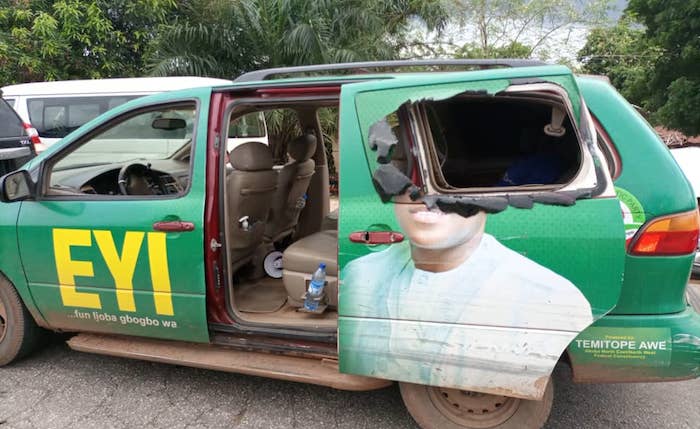 About five persons were reportedly sustained injuries when the convoy of Governor Oluwarotimi Akeredolu rammed into that of People’s Democratic Party governorship candidate Eyitayo Jegede’s campaign train at Oba-Akoko in Akoko South-West where some APC supporters started attacking the PDP followers.

BusinessDay gathered that no fewer than three vehicles in the convoy of Jegede were damaged, while Jegede himself was reportedly held hostage inside the palace of the monarch of the town by gun-wielding hoodlums suspected to be agents of the governor.

But the ruling APC claimed hoodlums loyal to the PDP candidate, Jegede, attacked the convoy of Governor Akeredolu at Oba Akoko.

While it was gathered that the branded campaign vehicle donated to Akeredolu campaign by Sola Iji was set ablaze by the PDP hoodlums.

But the statement issued in Akure by Samuel Fasua, Jegede’s media aide condemned the attack, saying: “In the last five days too, there have been series of attacks on PDP supporters in Aiyede-Ogbese community in Akure North LGA, leading to machete and gun attacks and the burning of, at least, two houses of PDP members.

“These continued attacks on PDP members by Aketi’s political thugs and shock troops, are no doubt threatening the peace of our dear state.

“We earnestly call on President Muhammadu Buhari and the Inspector-General of Police to urgently wade in, to save the lives of members of the public who are being prevented by the powers-that-be in Ondo state from belonging to political parties of their choice.”

On its own parts, the APC in a statement made available to journalists in Akure through Richard Olatunde, Spokesperson, Akeredolu/Aiyedatiwa Campaign Organization said, “we are shocked and saddened by this attack, we are not too surprised, because the PDP has shown that it is not focusing on issues in its campaign for the election. They will rather deploy violence and falsehood to score cheap political points.

“We say this is despicable and we view it as a sign of desperation by opposition parties in the state, who can’t stand the popularity of the APC, as they have seen the handwriting of their imminent defeat in the coming election on the wall.

“This unfortunate act is not only condemnable, but also deserves serious reprimand. So, we call on security agencies to investigate this latest attack by the PDP against the APC and bring the perpetrators to justice. This must not be swept under the carpet, as it portends a grave danger for the smooth conduct of the forthcoming Governorship election in the state.

“While we await the necessary action from the security agencies to bring perpetrators to book, we want to warn those who are bent on fomenting trouble in the state to desist.”