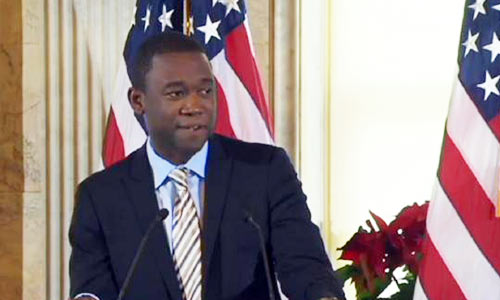 Adewale “Wally” Adeyemo, the deputy secretary of the treasury helped design the economic sanctions against Russia ‘s Vladimir Putin. The sanctions followed the country’s invasion of its neighbour, Ukraine, to the chagrin of the world.

Adeyemo served in the Barack Obama administration since 2009.

He was part of the team that helped coordinate response to the global recession at the Treasury Department, laying the foundation for renewed growth at home in the US and abroad. He has been a point person on a range of international economic issues, including negotiations on strong currency agreements around the Trans Pacific Partnership.

Adeyemo was born in Ibadan, Nigeria. He immigrated to California’s Inland Empire as a young child with his parents, an educator and a nurse. He attended the University of California, Berkeley and Yale Law School.

He was sworn in as Deputy Secretary of the Treasury on March 26, 2021. He has been at the centre of many of the country’s major economic policy decisions since the 2008 financial crisis and has worked in organisations across the public, private, and non-profit sectors to build a stronger and fairer economy.

From 2015 to 2017, Adeyemo served in the White House as Deputy National Security Adviser for International Economics and Deputy Director of the National Economic Council under Obama-led US administration. He also served as President Obama’s representative to the G7 and G20.

As Deputy Secretary, Adeyemo serves as the Treasury Department’s number two official and chief operating officer. He has taken a role in Treasury’s national security, economic inequality, and pandemic-related economic recovery work, while supporting the Secretary in driving the Department’s fundamental mission “promoting economic growth and ensuring the financial security of the United States.”

Read also:  How Water, Nigerian-born US based model came to limelight

Adewale Wally Adeyemo holds that the multilateral coalition President Biden has helped assemble is animated by the idea that one cannot violate the sovereignty of another country and continue to enjoy the privileges of integration into the global economy.
“[This] position is reflected in our swift and decisive actions to counter Russia’s aggression,” he said.

According to Wally Adeyemo who will be 41 on May 20, the financial sanctions, trade restrictions, and export controls put in place against Russia are being implemented by a coalition that includes more than 30 countries from around the globe who represent more than fifty percent of the global economy, issuers of the world’s most widely used convertible currencies, and producers of the world’s cutting-edge technologies.

“As long as Russia’s invasion continues, our sanctions will continue. Even as we continue to pursue rigorous financial sanctions against Russia and its key financial institutions, the next phase of our work will be to take apart Russia’s war machine, piece by piece, by disrupting their military industrial complex and its supply chains,” Adeyemo said.

“The treasury is working with our colleagues across the government and our allies and partners on operationalising the results of the review, including how to use our anti-corruption sanctions authority with these principles in mind. We also plan to use new resources like beneficial ownership data to help implement the review’s recommendations and enhance the targeting and efficacy of our sanctions action.”

Is Rotimi Amaechi an Ikwerre, Igbo or just a Port Harcourt Boy?