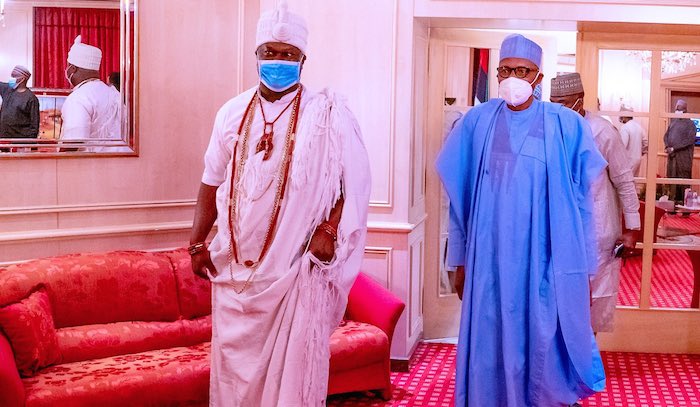 President Muhammadu Buhari on Wednesday widened consultations on the lingering insecurity in the country, which recently culminated in ethnic bickering and issuance of quit notice to Fulani herdsmen in Ondo forest reserve.

The president met behind closed doors with the Ooni of Ife, Enitan Ogunwusi, as part of efforts at resolving the crisis.

The monarch, while speaking with State House journalists after the meeting at the Presidential Villa, Abuja, said traditional rulers have resolved not to allow politicians to take advantage of the crisis.

“It won’t turn out to be very political because political parties might probably want to hijack it and to the glory of God as the co-chairman of National Council of Traditional Rulers, it is our responsibility and our duty to make sure that everything is right, all and sundry is in good shape,” Ooni said.

“The take home, the president has assured, is that it is not going to be a political thing because we all know the problem all over the country,” he said.

The Ooni noted that there are lots of bad eggs that mix across the entire country.

“I am here as the co-chairman of National Council of Traditional Rulers to get the assurance of Mr. President that either of the parties won’t turn it to be a political funfair for us to just risk the lives of our people, our innocent citizens not only in the South West but the entire country,” he said.

The consultations came amidst criticisms from the traditional rulers that government hardly consults with them, especially on issues bordering on local crises.

With such consultations, the government is expected to get the benefits of the traditional rulers’ hindsight, unbiased information that will help to balance information from the mainstream security agencies.

The Ooni also said President Buhari assured other traditional rulers of his plans to work with them now.

“It is very important for us to work very closely with the government so that we can separate the good, the bad and the ugly,” he said.

On the Fulani herdsmen, the Ooni urged the government to “separate the corn from the chaff because a lot of them are actually coming into the country due to the porous border that we have”.

“We are doing what is called e-border now in Nigeria and it is very efficient and we all need to work with them,” he said.

He reiterated that the governors and other political rulers including Mr. President have assured that they must work with the traditional rulers so as to separate the good from the bad and get the right society in proper perspective.

“So, here the objective is politics shouldn’t be mixed with the safety and the security concerns of our people. Politics should be completely taken out of it and to the glory of God Mr. President said he is fully on board with us as traditional rulers,” he said.

The Ooni also described the appointment of new service chiefs as “good refreshment”, adding that “there is a new blood, a new intake, fresh ideas will come on board”.

“At least there has been a lot of hue and cry of security issues in Nigeria now, we are not all safe, but with what Mr. President has done and providentially, I am experiencing it at the seat of power, it is a welcome development,” he said.

On the tension created by the quit notice by Ondo State governor, the Ooni insisted that “the best way forward that is critical is to separate the bad eggs from the good eggs and take politics out of it.

“We don’t want any politics to be mingled with it. We the traditional rulers, we know the good, the bad and the ugly in our domains. So it is a very clear strategy. Those bad eggs we want to fish them out, politics is different from taking out the bad eggs from the good eggs and it is the blessing of Mr. President we have come for. So any time we are sensing politics, we the traditional rulers have to cry out, so that is the object why I am here,” he said.

What to expect in Apapa property market as gridlock ends

C’river to deploy drones in supply of healthcare materials

Nigeria to benefit from 400 international instruments as Reps, stakeholders endorse…