After a sluggish exit from a recession, Nigeria’s economy has grown by 0.51 percent in the first quarter of 2021, marking two straight quarters of expansion after negative growth in the second and third quarters of 2020.

Read Also: Nigeria&#8217;s Q1 GPD numbers show poverty still on the rise
The Q1 2021 growth rate was slower than the 1.87 percent recorded in Q1 2020 – though higher than 0.11% recorded in Q4 2020, according to the latest report from the National Bureau of Statistics (NBS) released Sunday evening. 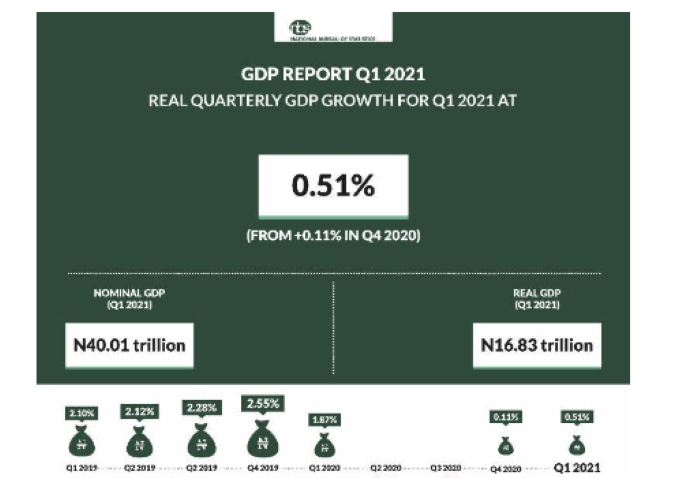 “This is indicative of a slow but continuous recovery,” the NBS said in the report.

“Nevertheless, quarter on quarter, real GDP grew at -13.93 percent  in Q1 2021 compared to Q4 2020, reflecting a generally slower pace of economic activities at the start of the year.”

Aggregate GDP stood at N40,014,482.74 million in nominal terms within the quarter, the NBS stated.

Compared to the first quarter of 2020 which recorded aggregate GDP of N35,647,406.08 million, the performance is higher, indicating a year on year nominal growth of 12.25 percent.

The nominal GDP growth rate in Q1 2021 was higher relative to 12.01 percent growth recorded in the first quarter of 2020 as well as the 10.07 percent in the preceding quarter.

Quarter-on-quarter, the oil sector recorded a growth rate of 35.6 percent, the NBS noted.

It however accounted for 9.25 percent of aggregate real GDP in Q1 2021, slightly lower than 9.5% recorded in the corresponding period of 2020 but higher than in the preceding quarter, where it contributed 5.87 percent.