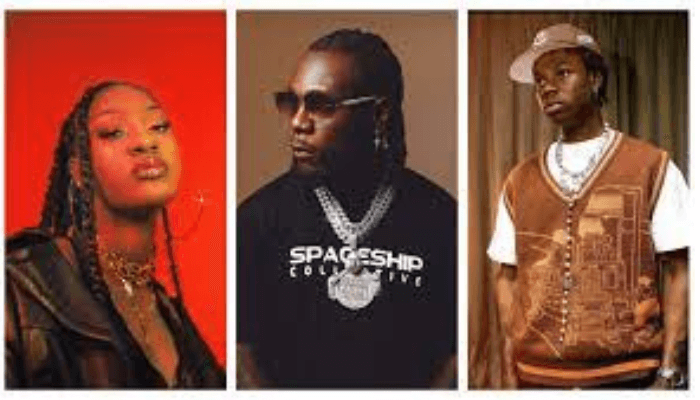 Burna Boy’s “Last Last,” Tems’ “Free Mind,” and Rema’s “Calm Down” remix with Selena Gomez all remain on the Billboard Hot 100 for the chart week of September 24, 2022.
Afrobeats artists on the Billboard Hot 100 are proof of the huge wave of the genre and its global consumption by listeners from around the world. The Billboard Hot 100 is the music industry standard record chart in the United States for songs, published weekly by Billboard magazine.
Tems’ “Free Mind,” which has been on the chart for nine weeks and moved up four spots from No. 56 to No. 52, leads the top entry from Nigeria.
The hit song by Burna Boy, “Last Last,” which is already in its tenth week in rotation, comes right behind it at number 54.

Read also: MAD Solutions earns more forex for Africa with digital music marketing, promotion; CEO
Rema’s “Calm Down” remix, on which he collaborates with well-known Pop diva Selena Gomez, saw a slight slide in its second week on the chart, falling from No. 91 to No. 92.
On the US Afrobeats Chart, Rema’s “Calm Down” remix keeps the top spot for an additional three weeks on the chart.
Coming second place on the charts is “Last Last” by Burna Boy, and the number 3 song is “Free Mind” by Tems. The number 4 song is Wizkid’s “Essence” remix, and the number 5 song is CKay’s “Love Nwantiti (Ah Ah Ah)”.

A day in a Nigerian film school