According to the most recent statistics, Nigerian moviegoers paid more for action films in 2021. According to Insightful cinema, the genre grossed over N2.3 billion in Nigerian cinemas in 2021, making it the highest-earning movie genre, with Hollywood accounting for 67 percent (36) of all action movies exhibited.

Box Office giants like Spider-Man: No Way Home( N526 million) which is the movie of the year and the most successful at the box office domestically and globally, ‘Fast and Furious 9’(N233.6 million), and ‘No Time To Die(N190.7 million) was the top three highest-grossing action movies in 2021.

Patrick Enaholo of the School of Media and Communication, Pan-Atlantic University, Nigeria, spoke with BusinessDay on why Nollywood had such low numbers in terms of production and gross in the genre.

“To make a decent action film, two things are required: first, a sufficient market budget such as Funke Akindeles’ ‘Omo Ghetto the Saga,’ which has seen success locally and even beat international movies at the box office; Second, the industry needs more franchise movies that have a lot of anticipation from movie fans,” Enaholo said.

He went on to explain that creating a big splash at the box office necessitates being based on excellent storylines that people are familiar with, citing the most recent James Bond film as an example of a popular series with a good plotline.

Temi Olaoluwa, a documentary filmmaker, discussed the lack of adequate stuntmen for required stunts on set, insurance for those stuntmen, and inadequate equipment or camera to get a specific shot of a stunt without having to repeat the stunts, which could endanger the stunt man or waste money on props as all the reason for the low number of the action genre in the Nollywood movie industry.

In 2021, the drama genre accounted for little under 80 percent of the 124 Nollywood films that were released in theaters. This means that Nollywood was responsible for 81 percent (96) of the 119 drama films.

There were 23 Nollywood movies in the Comedy category, accounting for barely 19 percent of all films in the industry. On average, Nollywood comedy films gross $6 million more than drama films. 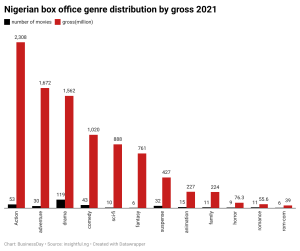 Tom Holland’s Peter Parker has traveled so far from his enjoyable low-key Homecoming, his secret identity revealed thanks to ‘Far From Home’, that he must literally gamble with fate reaching far beyond his own universe.

Spider-Man: No Way Home swiftly became the most anticipated film of the year for many fans, thanks to the brand’s popularity and online speculations regarding returning characters from previous Spider-man franchises. Audiences flocked to see the picture over and over again when the final product managed to live up to expectations.

It’s no surprise that No Way Home became the only film to reach the $1 billion mark worldwide and capture the title of best-grossing film of 2021.

With this being the ninth edition in the Fast and Furious franchise, fans were excited to see John Cena join an already star-studded ensemble, as well as the return of Han (Sung Kang) as the franchise retcons the character’s death.

No Time To Die is another movie that has been finished for a good year. It has just been sitting around, gathering dust, and waiting to be released. But the movie was worth the wait, as it’s the perfect ending to Daniel Craig’s tenure as James Bond

Shang Chi And The Legend Of The Ten Rings (N178.6 million)

When it came to the hype, the film marked the MCU’s true return to the big screen, with viewers loving the martial arts action sequences and Chinese culture.

Shang-Chi and the Legend of the Ten Rings grossed $432 million worldwide, despite the fact that it didn’t play on a single screen in China.

Love it or hate it, there was no denying that there was widespread interest in seeing the unique film and the curiosity was enough to push the divisive blockbuster into the top 10 grossing films of the year.

Married but living on purpose, here is how to live positively independent