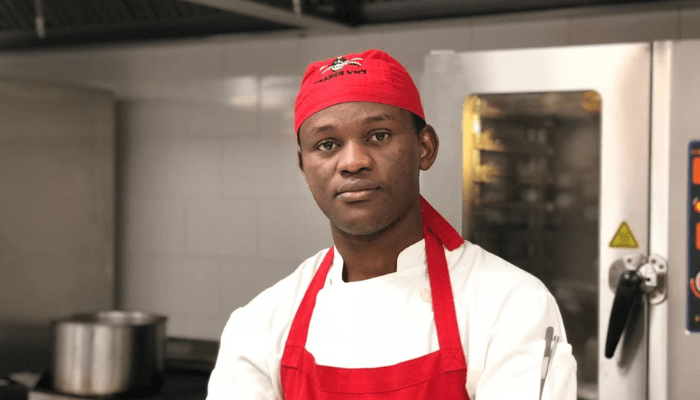 If you are among those who see every negative about Nigeria, there is a young talent that will change your mind and resentment about his country of birth.

Yes, he is young, in his late twenties, yet a gifted hand with one of the world’s largest hotel chains.

An assistant supervisor at Hilton Jumeirah, Caleb Anis is truly a gifted hand in the Dubai-based fiver star hotel, where his creative ingenuity has seen the creation of signature dishes for the high net worth global guests that call the hotel temporary home, while in Dubai for business or holiday.

His current position, which is popularly known as ‘demi chef’ in the culinary parlance, offers him the opportunity to experiment with food, while living out his dream of building a career in hospitality and ultimately becoming an executive chef in the future.

Instead of banking, telecom and oil and gas sectors where his folks dream to be, Demi Chef Anis says

Being a chef has been a career and lifestyle dream for Demi Chef Anis, who prefers a career path with the hospitality sector than in blue chip companies where his folk are daily scrambling for.

Though building a reputable career in the culinary profession is very tasking and competitive, he is committed to going the extra mile to make his mark in the sector.

But the Abuja ‘homeboy’, who has been recording some feats at Hilton Jumeirah’s kitchen in Dubai, in the last two years, will always remember his days of little beginning, especially at Transcorp Hilton Abuja, which he appreciates for offering him opportunity through the 2016 apprenticeship programme.

Demi Chef Anis came top of his class in the apprenticeship programme in 2016 and was given an opportunity at Transcorp Hilton Hotel Abuja afterwards. “Hilton Group gave me the foundation, that is why I am here today and without Hilton I would not have been where I am in Dubai or in the hospitality sector today”, he explains.

Since stepping out of the country, Demi Chef Anis has always had his folks back home in mind. In 2019, he started an initiative that baffled his mentors on the job and even the management of Transcorp Hilton Abuja.

The Demi Chef, who just started out a career in Dubai, is already giving back to his folks.

In 2019 and to the amazement of the Nigerian hospitality industry, the young chef created a culinary competition, which he called ‘Anis Cooking Competition’.

Then on vacation, the young chef gathered seven contestants who explored new menus with ingredients provided by Transcorp Hilton Abuja the hotel.

For five hours, the seven ambitious young chefs tasked their creative ingenuity and came up with exciting new menus, tasted and approved by a panel of judges comprising three directors of the hotel, the head of training and Shola Adeyemo, the then public relations/marketing manager of the hotel.

“The contestants cooked one dish on two plates. It is a mix of local and continental offerings, like a fusion menu”, he says.

The winners were happy and were also intrigued by the fact that a former apprentice, who passed through the hotel could come back to show appreciation and motivate those who are coming behind to excel.

Though he organised the competition to give back to his folks at the hotel that he worked at Transcorp Hilton Abuja before, most importantly, he thinks that they need to improve their skills in order to have the same opportunity he is enjoying at Hilton in Dubai.

He insisted that Nigerian professionals are talented, good enough and are doing well abroad, hence they need to encourage more to aspire for such a global feat even from their little corner at home.

Well, Demi Chef Anis is just starting; he is cooking something very delicious for more of his folks and will be unveiling it soon, while achieving more feats.

A day in a Nigerian film school