“From a very early age, I was made to believe that I can” – Owen Omogiafo 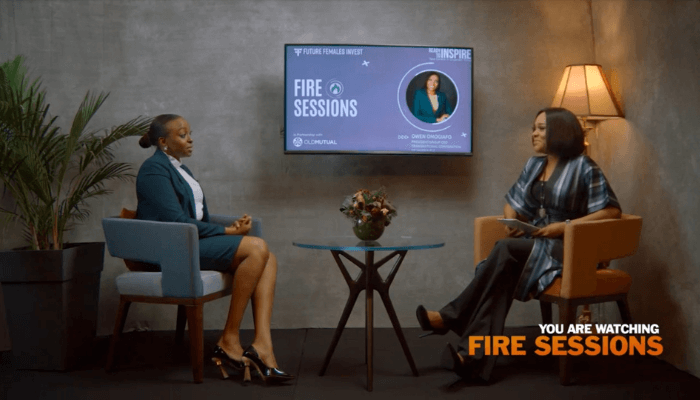 My guest on the fourth Episode of the show was Owen Omogiafo.

We begin her interview with introductions on her company and roles, while I opened the conversation describing her as a go-getter and audacious woman. She then went on to describe her corporate persona and family, sharing with us on being married and blessed with three children (a son and two daughters.) Owen describes herself as fun loving but very serious about her work and life. She told us she loves to cook, always seeking to improve herself and loves to impact lives positively for the better.

She admits her job is demanding, and managing that with family has its challenges nevertheless, she absolutely loves what she does. Owen says she had to grow up very quickly. She was born into a very comfortable home, “My spoon was so silver it was nearly platinum” she recalled. Being the youngest, she loved the life she lived, but a few years down the line, she said her dad lost every single thing that he had except for his mental health, his dignity and his family.

Going from being so comfortable to trekking to school under the hot sun, her brother lapping her inside the bus so they could have some spare transport fee to buy snacks, these experiences Owen said wasn’t a walk in the park, as this happened while she was in primary and by extension secondary school. This obviously explains why she had to grow up quickly. 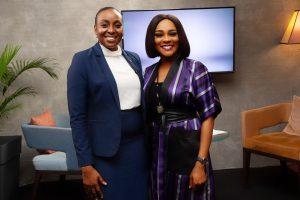 “From a very early age, I was made to believe that I can” she said. Her father would give her past questions that her older brothers had done despite the age gap between them. She would get the papers and review it with her dad. At this point, it is okay to call Owen a daddy’s girl! Her parents split up while she was 8, so she had to be raised by a single dad, though her parents were both committed to their growth and progress despite their challenges.

As the first female President/Group CEO of Transcorp Plc, a role she began at 39, she affirms she had always been an early starter. After her university, she started a job at a stockbroking firm as an intern but within a short period, she was given higher responsibilities. By that time, her father’s business had started kicking up. She stated that she called her parents and asked them to stop sending her pocket money because she observed that people who didn’t come from affluent homes were making a living from their earnings and so, she felt she had no excuse because she didn’t have to pay rent amongst others.

“It is an honour to be part of something so great. Everyone did everything in togetherness and that made us all multitalented.”

Her salary was increased in a short period of time. She later served in two banks and then moved on to join Accenture. Married at 23, first child at 24, again, Owen’s life was filled with early starts. Her ability to be innovative and not complacent on her job was also a major plus for her.

On working with Tony Elumelu (TOE), she said she had to temporarily occupy the position of someone who went on maternity leave, and she took it very seriously. It was to be a four months relief and when the four months ended, she was made to stay in the executive office at UBA.

2010 came with the change in banking policies when they put the tenure on CEO’s limit, and TOE and other bank CEOs were impacted however, it wasn’t a bother for them at UBA because at that time, there was already a succession plan. “Succession plan is so strong in the Heirs Holdings empire” Owen revealed, and by August 1st 2010, Heirs Holdings and the TOE Foundation were born. “It is an honour to be part of something so great. Everyone did everything in togetherness and that made us all multitalented.” She said.

Step by step Owen began to climb the corporate ladder and in 2020, she was made President/Group CEO of Transcorp Plc.

Generally, we all aren’t comfortable talking about our vulnerability, and it was time for Owen to share her fire moments with us. When she said “Difficult to say, but do it I must because someone else might just be going through this”, I completely understood what she meant.

She tells me that in 2009, her husband had to go for a procedure, it was just meant to be a regular normal procedure. He did, and it went well, but as it is with a lot of post-up care you would find, it was nothing to write home about. She recalls that day in the hospital asking about the discharge instructions and they were wondering what she was asking about. She says the doctors were great but the post-up was the challenge.

They went home and he was quite in some pain. He wanted to shield her from what he was going through. She would ask him and he would smile in return and say he was fine. By the 1st of May, a public holiday, they were sitting in the living room, “God was at work” she said, because a number of miracles happened. They usually don’t leave their windows open because she is asthmatic and their first child is also asthmatic, so they keep their windows closed because of dust. That day, their windows were open. Also, when power goes out, they always put on their generator but that day, they did not put on their generator.

Around 4pm, he got up and not too long, she started hearing him call out her name. Firstly, they would never have known or heard him if the generator was on. So when she said what happened was a miracle, this explains it well.

“I must thank Mr Tony and Dr Mrs Elumelu for their support. It felt like they were physically with Osato and I”

“My husband doesn’t shout your name, he would walk up to you” she said. She got up and kept saying “Where are you?” she checked all round and couldn’t find him, but she could still hear him calling. So she went outside, and there he was on the floor, he had had a stroke! She immediately called on her bosses. By this time, she was still working in UBA and she was told to take him to Reddington Hospital immediately.

She called her neighbours and they came to support and carried him into the car. By this time, the left side of his face had collapsed.

They got to the hospital and took him to the emergency room. The doctors told her he did not just have a stroke but a double heart attack!

That time, she had only been married for 5 years, so she began to wonder what that meant, but as she said “God doesn’t sleep”. She remembers being in the ICU and the Neurosurgeon made him go through all the tests including squeezing his hands and asking him to wriggle his legs, but he couldn’t. So the doctor turned to her and said she shouldn’t worry, that he was stable and that in 3-6months time, with constant physiotherapy, he would be able to get his movement back. He walked out and there she was, soaked in her tears “Tears don’t solve the problem, it only relieves the tension you are feeling” she said.

Now, if you know who Owen is and how daring she takes on tasks, you will understand why I wasn’t shocked when she told me what she did next.

“I held my husband’s hand and said a quiet word of prayer and after saying that prayer, I asked my husband, Osato squeeze my hands. He squeezed my hands. I asked him to wriggle his toes and he did” Owen told me.

Immediately, she ran out and went to call the same doctor. She told him her husband squeezed her hand and the doctor looked at her in disbelief, but she insisted and he came back, ran his tests and all the tests came out positive. The doctor picked up the medical file board and started cancelling all the negative reports earlier written. Guess what? After then, he had full recovery!

That was not all, after the incident, her husband said to her “Didn’t you say when you were in London, you did a pap smear that was abnormal? Please go and do your follow-up”. He wanted to ensure everyone was okay.

She went to do her pap smear and the report wasn’t what she expected. She had to travel out and when she got to the hospital, the Oncologist did a biopsy. He confirmed her fears but told her she was very lucky and that if it had stayed in her for one month, she would have had a severe case and would have had to undergo chemotherapy. Going through several tests and all, it now resulted in secondary infertility.

That led her to her third fire session. In 2014, September, 5 years after the diagnosis and recovery, she went through an IVF procedure, first attempt, she was pregnant.

She got a positive pregnancy report and she was so happy, by then, they had two children because they had adopted their second child.

With excitement, they began to look forward to having their baby. They did and by August, her Gynaecologist told her they had to bring out the child. He was delivered through C-section and was diagnosed of Edward Syndrome and was not compatible with life. They had to sign a Do Not Resuscitate form (DNR).

What was intriguing was that the young handsome man kept defying the odds but by September 18 of same year, at 12:45am, he went to be with God. Owen had prayed a prayer of release a day before saying “Father, Let thy will be done”. The strong young man did not pass on at the hospital, surely his mother’s resilient spirit and father’s determined nature was in there in his body.

“I must thank Mr Tony and Dr Mrs Elumelu for their support. Their support was as if they were physically there with Osato and I. They were calling to check on us”. She said.

However, Owen tried again and had her beautiful daughter. You need to meet her, a vivacious angel I dare say!

After a truly emotional story, we hugged after the recording. Owen is indeed a wonder! 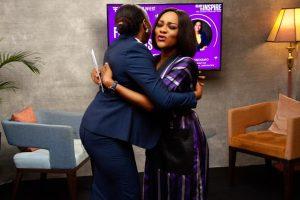 From Owen’s story, obviously, it is good to have a solid support system but beyond that, what is key is that, despite all the fire moments Owen went through, today, she sits as the President/Group CEO of a top conglomerate, Transcorp Plc. She never allowed her situation get the best of her, she just kept rising steadily.

For her heart stirring story and resilience, for her audacious nature to triumph above circumstances, for her faith in God and love for her family, Owen deserves all the accolades. Give her some when you meet her and tell her how inspiring she is!

The programme airs every Thursday on Wazobiamaxtv on DSTV channel 259 and UHF 57 Terrestial (Free to air) 7:30pm WAT.

5 Tips for reconnection with an emotionally distant spouse