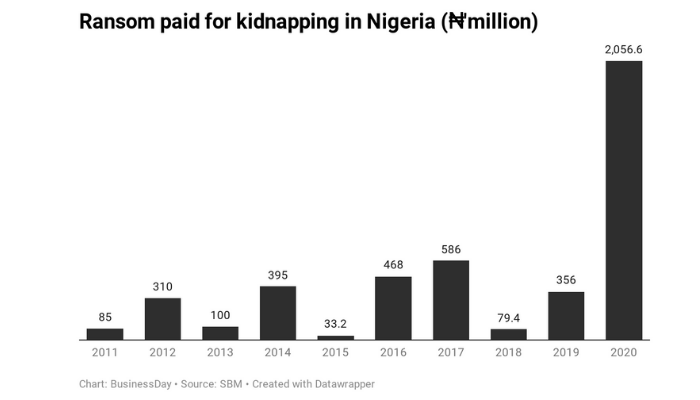 Some companies, particularly multinationals in Nigeria, are taking up kidnapping insurance covers for their top executives, BusinessDay has learnt.

This is in response to the rising insecurity across the country, where a lot of people have been kidnaped by bandits who demand payment of a ransom in millions of naira.

According to SBM Intelligence report, an average of 13 persons were abducted daily in Nigeria in the first half of 2021, bringing to 2,371 the number of persons kidnapped in the country as of June 2021.

Gbenga Olawoyin, managing director/CEO of Prorisk Insurance Brokers Limited, confirmed the availability of the kidnap policies in the market.

According to him, some underwriters are offering the product but it is treated with the utmost confidentiality.

“If my company gets the cover for me, it becomes risky when you let other staff know that I have it because I have become a potential source of money for the kidnappers,” Olawoyin said.

On what the claims experience has been, he said: “No insurer will share their experience with you because it is a business of confidentiality, and it’s not celebrated.”

What an underwriter can do is simply to increase the premium if it is too volatile or drop the cover, he said.

Chika Onwunali, managing consultant at Premium Debate, said kidnapping insurance could be supported because it benefits a risk-averse company or those in politics, as long as it does not raise the prospect of making kidnapping a big business.

Leonard Akah, director of policy and registration at National Insurance Commission, also confirmed the existence of kidnap policy in the Nigerian insurance market, saying: “Yes, a few companies offer it.”

SBM Intelligence, a Lagos-based research and consulting firm, said that between June 2011 and the end of March 2020, there were 767 reported incidents of kidnap for ransom in Nigeria.

It said ransom estimated to be around $18.34 million was equally paid, adding that notable among the cases are that of the students of Government Secondary School, Kagara, Niger State; Government Girls School, Jangebe, Zamfara State; Federal College of Forestry Mechanisation and Greenfield University, both in Kaduna State.

The SBM Intelligence report estimated that families and affiliates of victims pay ransoms ranging from $1,000 to $150,000.