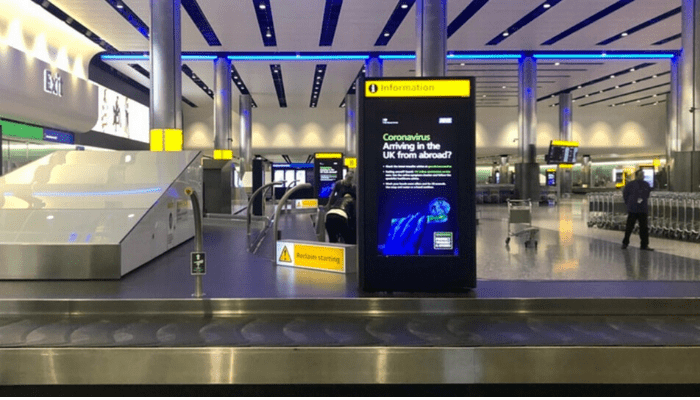 Governments in all large western economies took drastic measures to limit public movement on Monday, closing borders, shutting down retailers and ordering citizens to stay in their homes in an urgent effort to arrest the spreading coronavirus pandemic.

The most extreme measures were taken in France and Northern California, where authorities imposed Italian-style prohibitions on anyone leaving their homes, while Brussels proposed a 30-day ban on all “non-essential travel” into the EU.
President Emmanuel Macron barred the French from anything other than essential outings for at least two weeks, although residents would be allowed to shop for food, take exercise and go to work if it was impossible for them to do their jobs remotely.

“We are at war,” Mr Macron said in a nationally televised address. “Never has France had to take such decisions, albeit temporary, in time of peace.”
San Francisco and much of the surrounding Bay area imposed similar measures, ordering all residents to “remain in place” with exceptions for “essential needs” only.
“We know these measures will significantly disrupt people’s day-to-day lives, but they are absolutely necessary,” said London Breed, San Francisco’s mayor, who acted in concert with authorities in nearby Santa Clara, Marin, Contra Costa, San Mateo and Alameda counties. “These measures will be disruptive to everyday life but there is no need to panic.”

The moves come a day after Spain followed Italy by instituting its own national home confinements. The lockdowns were in response to the exponential growth of cases in Europe and the US, with European diagnoses growing from 2,200 at the start of March to 54,000 on Sunday. As of Sunday, the number of cases of Covid-19 outside China had surpassed the number inside China.

In the US, which has more than 4,200 reported cases, President Donald Trump introduced new recommendations that included avoiding gatherings of more than 10 people, refraining from unnecessary travel, and shunning bars, restaurants and public food courts.
“If everyone makes these critical changes . . . we will rally together as one nation and we will defeat the virus,” Mr Trump told a White House news conference. “We would much rather be ahead of the curve than behind it.”We are at war.
Emmanuel Macron, French president
When asked if he was considering imposing a nationwide quarantine, Mr Trump replied: “At this moment, no.”  Anthony Fauci, head of the US National Institute of Allergy and Infectious Diseases and member of the White House’s coronavirus task force, said the new guidelines were not an overreaction: “We hope that the people of the US will take them seriously.”

Although Germany stopped short of imposing the same kinds of restrictions on internal movement as neighbouring France and Italy, Chancellor Angela Merkel announced a shut down of shops, churches, sports facilities, bars and clubs.
Ms Merkel admitted the measures were “drastic” and unprecedented in Germany’s postwar history. “But we have to do this right now to reduce the number of contacts and with it the number of . . . serious illnesses, and so prevent our health system coming under excessive strain,” she told reporters.

Under the provisions agreed by Ms Merkel’s cabinet and the governments of all 16 of Germany’s states, all shops will be closed, apart from those selling food and drink. Banks, chemists, petrol stations, newsagents, as well as certain other categories of retail businesses such as laundromats, will also be exempt from the ban.
Ms Merkel declined to say how long it will last. “The more people comply with these restrictions and regulations, the quicker we’ll get through this phase,” she said.

The shutdown was announced hours after Germany imposed controls on its borders with France, Switzerland, Austria, Denmark and Luxembourg. Traffic jams quickly began building up on some of Germany’s key border crossings.

Ursula von der Leyen, president of the European Commission, attempted to check the erection of further national border controls within the EU by proposing a ban on all travel into the EU and four non-EU countries that are part of Europe’s passport-free Schengen zone.

Mr Macron has been particularly outspoken in opposition to national governments reimposing border controls unilaterally, and participants in a conference call of EU leaders on Monday said the French president pushed hard for a pan-European response instead.
“We must co-ordinate the measures we take to avoid a negative impact on our people, our economies and our supply chains,” said Ms von der Leyen.
Canada also moved to imposed its own ban on most foreigners entering the country, though Americans are to be exempt from the restriction because of the close economic integration of the two countries.
“If you are abroad at this time, it’s time to come home while it is still possible to do so,” warned Justin Trudeau, the Canadian prime minister.

Mr Trudeau made the announcement from the front yard of his Ottawa home, where he is under a two-week period of self-isolation after his wife, Sophie Gregoire Trudeau, tested positive for the virus.
Russia also said it would close its borders to all foreign citizens from Wednesday for at least six weeks. Russia has already closed off its land borders with China and Belarus and banned flights to most foreign countries, with the exception of some capital cities.

On borders, boundaries and the lockdown