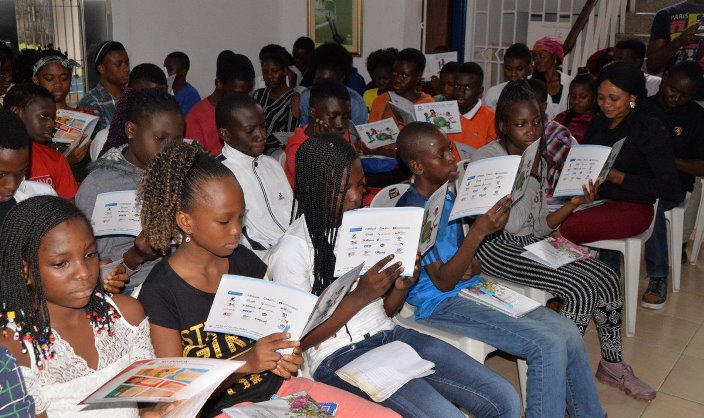 A survey in 2018 conducted by the United Nations Children’s Fund (UNICEF) indicated that the population of out-of-school children in Nigeria has risen from 10.5 million to 13.2 million; the highest in the world.

It was also discovered that, in seven states- Bauchi, Sokoto, Yobe, Zamfara, Jigawa, Kebbi and Niger- fewer than 3 women in every 10 women are literate.

The above statistics run counter to the UNICEF mandates that all children, no matter where they live or what their circumstances, have the right to quality education. Moreover, the Universal Declaration of Human Rights (UDHR) emphasizes this in Article 26(1).

Many Nigerian children speak English to some extent and also speak their local dialects quite perfectly.

According to the Truman Centre for National Policy (a non-profit research institution in Washington, D.C.), the cost of illiteracy to the global economy is estimated at USD 1.19 trillion.

The effects of illiteracy include limited opportunities for employment or income generation and higher chances of poor health, turning to crime and dependence on social welfare or charity.

For a problem that can be solved with books and teachers, illiteracy remains remarkably expensive for too many countries.

Speaking recently at the Literacy for Sustainable National Development and Empowerment Conference, Adamu Adamu, Nigeria’s minister of Education, acknowledged the precarious situation the country was in and called for urgent action.

The Minister, who was represented by Habba Hiladu, said that social vices such as drug abuse, malpractice, cultism, communal clashes and terrorism were on the rise because of the high illiteracy level in Nigeria.

“Education is the bedrock of any country’s development and any country that does not educate its populace is bound to fail. Unfortunately, in Nigeria, we have a very large population of illiterates; the number of illiterates, considering our population, is unbecoming,” he said.

However, amid the current gloomy situation, an initiative aimed at changing the narrative and bridging the gap has been birthed.

The Board of Trustees of the Book Swap Foundation in partnership with the International Network for Corporate Social Responsibility (IN-CSR) have concluded arrangement to launch the Book Swap Initiative.

This initiative stems from the need for children to read more books than parents/guardians can afford, to make reading fun for kids from an early age and to reduce the negative impact of book production on the environment and the society at large.

The Book Swap Foundation says the aim is to contribute to the action against child-illiteracy by establishing Book Swap Centres across the country for the provision of a steady stream of books to children in both the rural and urban areas in the country.

The promoters also said that it aimed to create an economically viable way of making reading materials easily accessible to as many children as possible.

“With the mission to cultivate a reading-for-fun culture in every child, this project aims to give every child access to read hundreds of story books through the setting up of Book Swap Centers which will be positioned in strategic locations across the country, with each centre serving up to 300 children.

“This initiative stems from the need for children to read more books than their parents or guardians can afford, make reading fun for kids from an early age and reduce the negative impact of book production on the environment and the society at large. Fundamentally, it will eliminate the learning gap for the less privileged and out-of-school children,” Eustace Onuegbu, lead consultant and one of the promoters, said.

According to him, “The Book Swap Initiative will place books back into the centre of social settings. The goal of The Book Swap Foundation is to give children the resources and skills they need to succeed. 300 children will be given 300 different books and encouraged to see the books weekly at a locally established book swapping spot. The aim is to establish, at least, 3000 book swapping spots to deliver 900,000 books to children who will each have the possibility of reading 300 books.”

To achieve this, the Book Swap Initiative seeks to partner businesses, international organisations, governments (national and state), Individuals, and ambassadors.

Speaking with BusinessDay on the essence of the partnership, Onuegbu, said: “We hope to partner businesses to align this excellent initiative with their Corporate Social Responsibility (CSR) objectives. We will open a centre in your host community or any community, school or location of choice no matter where it is located in the country.

“For international organisations, we want to align with their thematic areas, considering that child education directly promotes all the 17 Sustainable Development Goals (SDGs).”

According to Onuegbu, “We are partnering government at all levels to provide the enabling environment through endorsement, funding, monitoring and evaluations in order to change the narrative for every child.

“Our partnership with individuals will help make the much-needed change in their local communities. Sponsor a Book Swap Centre in their community. Together, we can make our world a better place to live.”

“Those we will identify as ambassadors will help spread the word. Reach out to their contacts, their sphere of influence and business relations to partner with the Initiative.”

The promoters said that through the Book Swap Centres, the Book Swap Initiative would contribute to changing the narrative on the state of child education in Nigeria.

“This initiative will create individuals who will, in turn, create wonderful things to contribute to the society. By this, Nigeria will have achieved a milestone in combating the vices caused by illiteracy. The Book Swap Initiative will contribute to the government’s commitment to realising the rights of all children in a bid to help them build a strong foundation and have the best chance of fulfilling their potential,” Bjorn Olatunde Lawal- Solarin, chief executive officer of Lantern Books, Literamed publications and founder of the Book Swap Foundation, said.

According to Onuegbu, one of the key benefits of the project, in addition to mass impact, is that organisations will at the end of every year receive a free detailed Social Return on Investment (SROI) and SDG Report (valid data for their Sustainability Reports) worth a few millions of naira from the project partners, the International Network for Corporate Social Responsibility (IN-CSR), when they fund 20 or more Swap Centres.

The Book Swap Foundation will be launched in Nigeria on May 6, 2021 at the Nicon Luxury, Abuja with Irina Bokova, director-general of the United Nations Educational, Scientific and Cultural Organisation (UNESCO) Nigeria, expected to deliver the keynote address.

Ndubuisi Ekekwe, a professor and Lead Faculty at Tekedia Institute, will be the guest speaker, while Adamu Adamu, minister of Education, will be the chief host at the event.

The Book Swap Foundation is a non-profit organisation registered under the laws of the Federal Republic of Nigeria. The Foundation’s mission is to prepare African children for the world through the magic of story-telling.

The Foundation is dedicated to working with strategic partnerships and with the 17 United Nations goals of sustainability to ensure the increase of children’s awareness of their environments.

It partners Literamed Publications Nigeria Limited, an organisation that has provided over 3,000 books to support this initiative. The foundation has Bjorn Olatunde Lawal-Solarin as founder, Eustace Onuegbu, lead consultant and Sarah Wahab as executive director.

Unattractive fiscals stunt more than half of Nigeria’s oil blocs