Chidozie Igweilo’s entrepreneurial journey began when he was first exposed to solar panels in 2015 as a field telecom engineer while working as a freelance contractor in Ondo State.
He noticed that people in the community would go to a particular kiosk to charge their mobile phones and pay a fee of one hundred Naira depending on the type of device. The owner of the kiosk used a small generator set (commonly called “I pass my neighbour”).
Igweilo said he immediately saw an opportunity to create solutions to a general problem in that community.

“It just didn’t make sense that people suffered this much for power to charge their mobile phones when there is abundant sunlight,” Igweilo felt.
The entrepreneurship drive was already visible in young Igweilo. He said, “I was fixing mobile phones as a kid, making money and I had a passion for electronics and building things. I have never been a regular 9 to 5er, so I knew entrepreneurship was what I wanted.”

Igweilo’s passion for entrepreneurship is also fuelled by a desire to see more locally manufactured products for the Nigerian market. So, in 2016 he founded Quadloop to provide tailored local solutions to Nigeria’s power problems and help more people charge their phones at home.
To prepare for the task ahead, Igweilo with an Economics degree, began to gain more knowledge about the sector, enrolled in incubation programs, which built his knowledge on design and product development. He has also undergone training from MP Infrastructure, GE Lagos Garage, Semicolon Africa, and School of Electronics and he is an alumnus of the Enterprise Development Centre of the Lagos Business School.

In 2017, Quadloop was officially registered with the Corporate Affairs Commission and by the end of the year, the company had its first prototype called “Bliss Solar Wall Lamp”. This prototype became their first product to hit the market in 2018. “We made 60 units of the lamp and they all sold out. I was going to exhibitions, attended events at rural communities to showcase the lamps,” he explained.
Igweilo said attending exhibitions helped him understand his target market and how to better sell his product.

“For example, we discovered that hospitals were a better market to sell the products because they needed to keep the power on even when the grid was down”.
“The feedback from customers at the time prompted us to go back to the drawing board and redesign. We realised we didn’t design the circuit in a way that protects the battery. So, when the battery undergoes the charge and discharge process for about a month or two it gets drained,” Igweilo recounted. 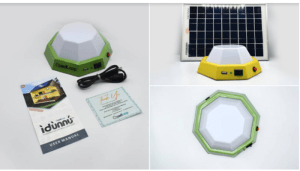 It was during the product redesign phase Quadloop joined the Nigeria Climate Innovation Centre NCIC/All On incubation program.
“The breakthrough for us came when we were announced as one of the winners of a $10,000 grant. This funding helped boost our operations, secured office space of over a million Naira, and funded our product research and development,” he added.

When asked to describe the impact of the training during the incubation program, he said “I learned a lot about design thinking, marketing, understanding user persona/pain point. We also learned the business model canvas and how to put our business on dashboard. This was helpful in helping us project and understand where we were and where we were headed as a company.”
The company is growing in ways Igweilo did not expect.

He is happy to see six years of effort come to reality. Quadloop’s recently made its first delivery to Aba and the feedback on performance has been very positive.
The company is now exploring online marketing strategies to reach a wider range of customers, but not forgetting their earlier target market which are hospitals, clinics, and midwife homes.
When I asked what’s next for the company, he didn’t skip a beat. “Quadloop is on a mission to be the best and largest Renewable Energy, Power Systems, Information Technology /Engineering company working to create value turning waste products to close the energy access gap in Nigeria”.
Ídúnù one of Quadloop eco-friendly solar lamps derives its name from the South-Western region (Yorubá) of Nigeria meaning “Joy”. It is aimed at aiding to solve a major issue of basic electricity across the region.

Ídúnù is a portable solar wall lantern that allows users charge phones, and can light up rooms, shops, & small shops. It has a 10,400 mAh lithium-ion battery capacity, automatic daytime sensor, a Universal remote control, 1A USB charging port, watts (6500k) bright white Led and a 10watts Poly Solar panel.
That image of people spending money at a kiosk to charge phones has never left him. You can say Igweilo has successfully put the kiosk he saw in Ondo State in 2015 out of business, six years later.

Wisdom Chapp-Jumbo is a Communication Officer at All On

Electricity is a necessary input for poverty alleviation in Nigeria- Sanusi

What does the UN Climate Change Conference want to achieve?