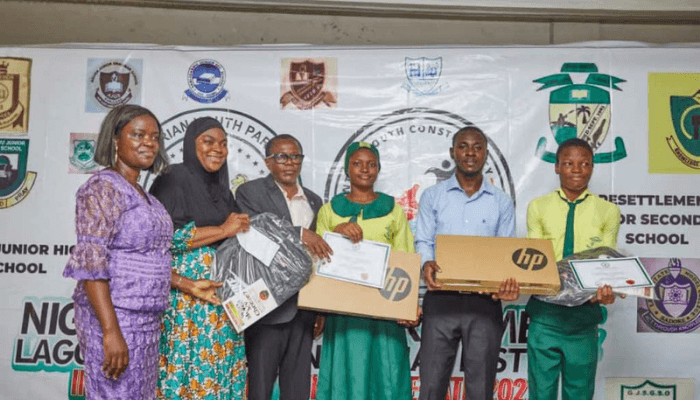 Abdulmumin Edidi, the representative for Lagos central senatorial district in the Nigerian Youth Parliament has organised an inter-secondary school debate competition on drug abuse among public secondary schools in the district.

Winners received prizes including laptops, tablets, and cash prizes following two rounds of a competition that saw 160 students from 16 senior and 16 junior secondary schools participating in an initiative to steer conversation against drug abuse in secondary schools. The schools were drawn from the 13 Local Government Area (LGAs)/Local Council Development Areas (LCDAs) and the 3 federal government schools in the constituency.

The first runners up and second runners up for both categories were also presented with prizes of school bags, books, and specialized training opportunities, while all other participants in the debate received books, and certificates of participation.

Ololade Adeyemi, the chief executive officer of Magna Carta Health and the guest speaker at the event spoke on the theme of the debate: “Stemming the tides of drug abuse.” Other dignitaries at the debate finals were Segun Dawodu, who represented the Lagos State commissioner for youth and social development, Oreoluwa Finnih, the senior special assistant to Akin Abayomi, the commissioner for health, Abimbola Fashola, the former first lady of Lagos State, among others.

The debate, according to Edidi, the convener in a press statement, was designed to initiate conversations against drug abuse in secondary schools through peer-to-peer education. It was an initiative drawn from the Nigerian Youth Parliament drug and substance abuse control policy brief 2022 which recommends cognitive behavioural health education in schools in bid to eradicate the menace from public schools.

The debate, he says, is not just a contest but an advocacy through which 160 anti-drug abuse student advocates have been raised across secondary schools in the Lagos central senatorial district. The debate, he also says, would be followed by establishment of drug free clubs in the schools as part of the plan to sustain advocacy against drug abuse in public secondary schools in Lagos State.