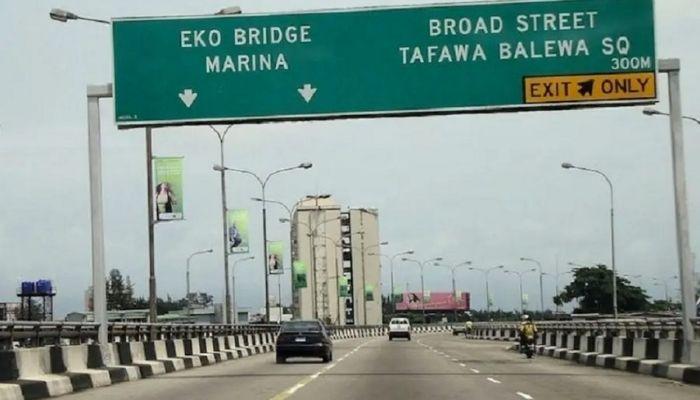 Like Apapa, Eko Bridge has become a by-word for gridlock where commuters have the choice of either spending three to four hours of their productive day in traffic or parking their vehicles at home and trekking to the the Island. It is a hard choice and, for many, the later is a lesser evil.

Every morning in this mega city, which is also aspiring to be a smart city or has become one by sheer dream or imagination, residents who live on the Mainland but have their businesses on the Island, are seen trekking long distances, sometimes from Costain or National Stadium.

This is because the two sections of Eko Bridge have been closed to traffic by the Federal Government following two separate fire incidents—one on Apongbon Bridge on March 23, 2022, and the other at the Ijora Olopa end of Eko Bridge on November 4, 2022.

When it was announced that Babatunde Fashola, the minister of works and housing, was coming to inspect the burnt bridge and repair work on the Apongbon Bridge, expectations were high that some relief was on the way for commuters on Eko Bridge.

One of the ways for the governor to get this done is to separate politics from governance. That, we hope, will created the needed will to get things, including the rail system, done even in this season

But that was not to be. Fashola’s visit, instead, left a sour taste in the mouth. “There will not be Apongbon for Christmas, as much as we tried,” Fashola, said, adding that the delivery date of Apongbon Bridge, earlier fixed for December 2022, had been extended to May 2023.

This, for us, is dream deferred almost indefnitely. It is the beginning of suffering when and where it should have ended. Six months for a project completion in election season is like eternity because, at a time like this, nobody is sure of anything.

But all hopes are not lost. There is something to hope for and that is the Lagos Blue Line rail system which the state government says will start test-running this month, December 2022, preparatory to its official take-off by the first quarter of 2023.

We see a fortunate and heart-warming coincidence here—that while the Federal Government extending commuters suffering on Eko Bridge for whole six months, the Lagos State government is waving a green flag which is assuring commuters that they will not cry for long.

“This administration will continue to keep to its promises on timely completion of infrastructural projects in the state; “we are launching the last T-Beam and it is part of our commitment to deliver the blue line project as scheduled and on time to the residents of Lagos,” Babajide Sanwo-Olu, the governor of the state, assured.

Continuing, he stressed, “this administration will continue to meet up with its promises on timely completion of infrastructural projects in the state; the 984th T-Beam for the blue line rail project is a confirmation that the project would be delivered on schedule.

“We want to ensure that we formally complete the blue line before December 31, 2022; we will be doing testing from December, with the hope that real passenger movement will start in the first quarter of 2023,” the governor said.

We have no reason to doubt the governor on his promise to Lagosians on this rail project. We have every reason to believe that the governor is well aware of the congestion and the attendant hardship on Lagos roads and bridges because he does not fly to his office or his numerous engagements. He uses the road too and, so, we believe that he knows it and feels it.

By its very nature, the rail system is a mass transit mode of transportation which is what Lagosians need now, especially for Mainland-Island commute that has become hellish. We believe that the Blue Line which will run from Mile 2 to Marina is a project whose time for completion and operation has come.

After 13 years of conception and construction, we believe that this project is old enough to get off the ground and get running like what happens in Cairo and Nairobi in Egypt and Kenya, respectively, who are not in the league of Lagos in terms of population and size of economy.

Cairo Metro is the solution to the city’s traffic challenge that was worse than what Apapa used to be in Lagos. The Cairo metro system has three lines. A fourth and a fifth are expected to be built in the future. But, currently, about 500 million passengers and 12 million tons of freight are transported on the urban rail network each year by the metro.

It is our expectation that the Lagos Blue Line will come to surpass this given its ambitious conception. We, therefore, urge Sanwo-Olu to remain focused and deliver this project as scheduled in the interest of humanity and the economy of the state which, in our view, will be a lot better for it.

We are, however, not unaware of the challenges, but we strongly believe that where there is the will, there is always a way. One of the ways for the governor to get this done is to separate politics from governance. That, we hope, will created the needed will to get things, including the rail system, done even in this season.