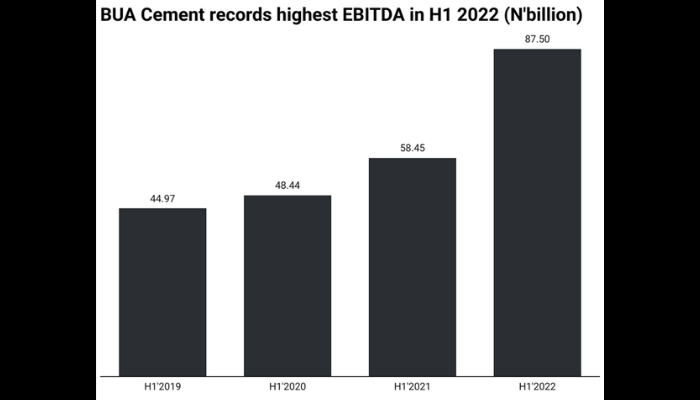 BUA Cement, Nigeria’s second-largest cement producer reported a 49.7 percent increase in earnings before interest, taxes, depreciation, and amortization (EBITDA) to N87.50 billion in the first half (H1) of 2022 from N58.45 billion reported in the first half of 2021.

The boost in EBITDA can be attributed to the 175.8 percent increase in other income which amounted to N200.14 million in the first half of 2022 from N72.58 million recorded in the corresponding period of 2021.

A breakdown of the unaudited financial statement showed a significant surge in insurance claims by a whopping 706.8 percent to N170.40 million in H1 2022 from N21.12 million in H1 2021 was the major driver for the increase in other income.

Oluwasesan Adeyeye, an analyst at CSL Stockbrokers Limited said “we believe the torrential rainfall seen in Q2 2022 may have limited cement demand in Q2 2022.” 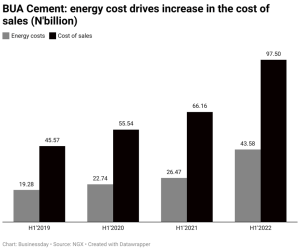 Adeyeye said, “we note that apart from the year-on-year increase in volume produced that may have necessitated cost increment, the company is also facing inflationary pressures and the impact of FX depreciation on energy prices.”

Similarly, exchange loss increased by 257.2 percent to N1.1 billion in the first half of 2022 from N295 million in the prior period (H1 2021), an increase the company attributed to the wide margin between auction bid rates and the I & E rates. 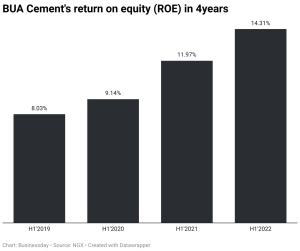 The cement manufacturer reported a negative cash flow used in investing activities of N-61.47 in the first half of 2022 due to the large cash outflow in the period.

A breakdown of the cash flow used in investing activities shows that BUA Cement invested in the purchase of property, plant, and equipment amounting to N61.64 billion in the first half of 2022. Its cash inflow from investing activities during the period was from the interest it received which amounted to N1.43 billion.

Similarly, its net cash flow used in financing activities was negative, amounting to N9.06 billion in the first half of 2022 due to repayment of loans, interest payment during the period, and lease liabilities which amounted to N6.48 billion, 6.63 billion, and N33.09 million respectively. 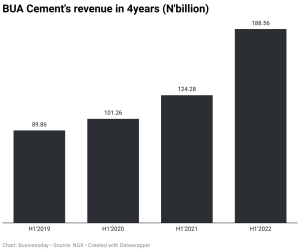