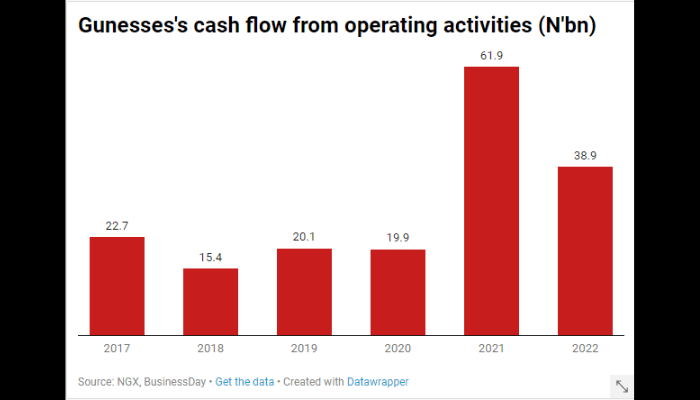 In the past two years, Guinness has been able to keep its high liquidity profile long enough to cover its debt obligations thanks to efficient working capital management.

BusinessDay’s analysis of the company’s financial-year-ending June 2022 financial statement shows that its net cash increased by 90 percent to N37.8 billion from N19.9 billion the previous year.

According to Olufisayo Ademilua, investment research analyst, CardinalStone, the higher net cash recorded is as a result of efficient working capital management by the company.

“The increase in net cash recorded by the company is as a result of efficient working capital management, which is reflected positively in the company’s cash flow from operations, thereby contributing to its total cash flow,” Ademilua noted.

According to Investopedia, a firm’s net cash illustrates the amount of cash available after deducting a company’s total debt from its total cash available. It shows the liquidity position of a company.

BusinessDay’s findings show that the beer maker has a history of net debt in the years preceding 2021. This means that the company was not earning enough cash to cover its debts.

Nevertheless, the company was able to restructure some of its working capital through aggressive cash collection from receivables and an increase in payables. 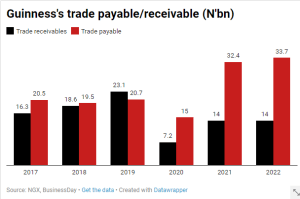 Their full-year-2022 investor presentation has shown that Guinness was able to adopt an internal restructuring strategy called “The Distributor Finance Scheme (DFS),” which reduced its credit risk as it saw an increase in cash sales and was able to control trade debts through a 37 percent increase in bank guarantees, which secured credit sales.

A bank guarantee means that banks will ensure that the liabilities of a debtor will be met. In other words, if the debtor fails to settle a debt, the bank will cover it.

On this note, trade receivables remained flat as it recorded N14 billion in 2022, the same as the previous year.

The DCF scheme was initiated in 2020, and before that, the company recorded a trade receivable of N23.1 billion in 2019, which drastically declined by 221 percent to N7.2 billion the next year.

According to Ademilua, the scheme enabled the company to increase cash used for financing activities while they increased their payables days for the aforementioned purpose.

“The commencement of the DFS enhanced positive earnings performance in the following years and restructured cash flow,” she said.

This year, Guinness recorded its highest profit in ten years. Its profit after tax ballooned by over eleven-fold to N15.7 billion from N1.3 billion in 2021, a recovery from the loss of N12.6 billion in 2020.

The decline in operating cash flow, however, can be attributable to an increase in the cost of inventory by 52 percent, to N32 billion, from N21 billion in the previous year. 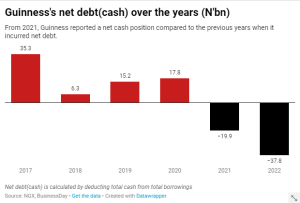 According to Ayodeji Ajilore, investment research analyst at ARM Securities, the increase can be attributed to higher costs of production for the company during the year, which is most likely to contribute to the increase in the company’s payables.

The financial statement showed that Guinness’s trade payables increased to N33.7 billion in the period under review from N32.4 billion.

On the other hand, their trade creditors increased by 13 percent to N71.5 billion on the back of higher trading and inflation, the company’s financial year presentation showed.

It also showed that their credit balances increased further due to foreign exchange issues.

The brewery company’s loans and borrowings increased by 96 percent to N31 billion from N16 billion the previous year, which was mostly used to finance working capital.

It was driven by a 214 percent increase in the letter of credit to N22 billion in 2022 by the company from N7 billion the previous year.

A letter of credit is a letter from a bank guaranteeing that a buyer’s payment to a seller will be received on time and for the correct amount.

The financial statement shows that its proceeds from loans and borrowings obtained during the year resulted in N34 billion, up from N16 billion the previous year.

BusinessDay’s analysis of the degree to which the company is financing its operations with debt rather than its own resources shows that its net debt to equity ratio increased to 42 percent from 27 percent in the previous year. Therefore, falling within the company’s target of 30 to 50 percent.

Likewise, its net debt to earnings before interest, taxes, depreciation, and amortisation (EBITDA) ratio, which shows how many years it would take for the company to pay back its debt, resulted in 1.16 times, exceeding the 0.5 to 1 times target set by the company.

Analysing the beer maker’s ability to pay interest on its outstanding debt shows that its net interest cover skyrocketed to 130.7 times in the full year 2022 from 9.7 times, thereby surpassing the 4 times target set by the company.

This resulted in a profit margin of 7.6 percent. This shows how well a company is able to generate profit from its revenue.

According to the CardinalStone research report, this was as a result of price increases, cost efficiency, and a material slump in net finance costs.

The research stated that Guinness’s strong revenue growth has mostly reflected the efficient transfer of cost burdens to consumers.

“We believe price increases will likely support earnings in the near term. However, they are hardly a sustainable top-line growth strategy over the medium to long term, given constrained consumer wallets,” the CardinalStone analysts stated.

Specifically, the company recorded an average price increase of over 20 percent across its product portfolio, with volumes rising by 1.0 percent in its financial year result.

Cost of sales moderated relative to sales at an increase of about 17 percent to N134 billion at the end of the financial year from N115 billion the previous year.

The company earned N7.15 per share and is paying it all out to shareholders in cash dividends.

On the back of the company’s positive results, its share price has rallied by 125.4 percent to N88 as of Friday and 183.6 percent on a year-to-date and year-on-year basis, making it one of the best-performing stocks on the Nigerian Exchange.

Finance income rose more than three and a half times to N1.9 billion from N529 million, while finance costs dropped by 54 percent to N2.1 billion from N4.6 billion.

Net finance costs, therefore, fell by 94.5 percent to N226 million at the end of the year from N4.1 billion.

Tell me you are Nigerian without saying it