GTCO rakes N39.7b from fees, commissions on transactions in H1 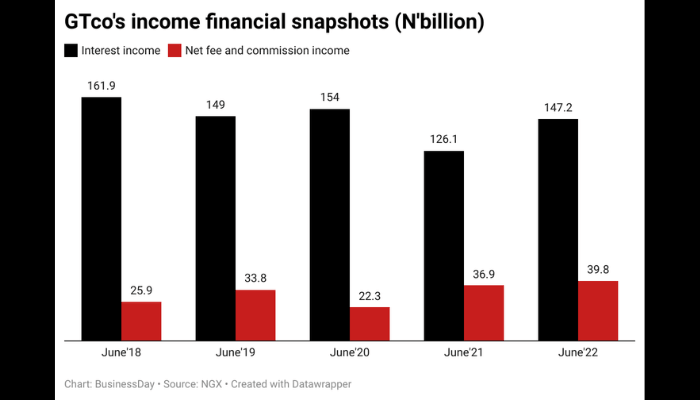 According to Coronation Research, interest income grew by 16.7 percent year on year in H1 2022 and was primarily supported by a 13.1 percent year-on-year growth in interest earned on loans to customers.

GTco’s loans and advances to customers stood at N1.8 trillion year on year.

Guaranty Trust Holding Company recorded a profit of N77.5 billion in the first half of this year, down 2 percent from N79.4 billion in the same period of last year.

Commenting on the results, Segun Agbaje, the group chief executive officer of Guaranty Trust Holding Company Plc said, “our results show an increase in key revenue lines and a strong performance in other financial metrics which reinforce our growth prospects as a leading financial services company.”

Analysts at Coronation Research said in a note, “interest expense rose by 38.4 percent year on year in H1 22, driven by a 44.6 percent year on year increase in interest paid on customer deposits as the group’s current and savings account mix deteriorated to 85.9 percent, compared with 86.7 percent in H1 21.”

Interest expense climbed to N26.3 billion, a 38 percent increase from N19 billion in the period under review.

“Interest expense growth moderated, up 38.4 percent year on year to N26.4 billion. On a quarter-on-quarter basis, interest expense was down 3.9 percent. We had modelled a gradual increase in the cost of funds through the year and forecast a funding cost of 1.8 percent for FY 2022 from 0.67 percent in June 2021,” CSL Research noted.

CSL Research said in a note, “we however expect growth in funding cost to significantly lag growth in assets yield for banks like GTCO with a high proportion of cheap deposits. Customer deposits grew moderately, up 6.2 percent in June compared with December 2021. Overall, net Interest Income grew 12.9 percent year on year.”

Net interest income climbed 13 percent to N121 billion from N107 billion in the period under review.

GTCO Plc is a fully-fledged financial services group with banking operations across West and East Africa and the United Kingdom as well as non-banking businesses in several key industry segments including Payment, Funds Management, and Pension Fund Management.