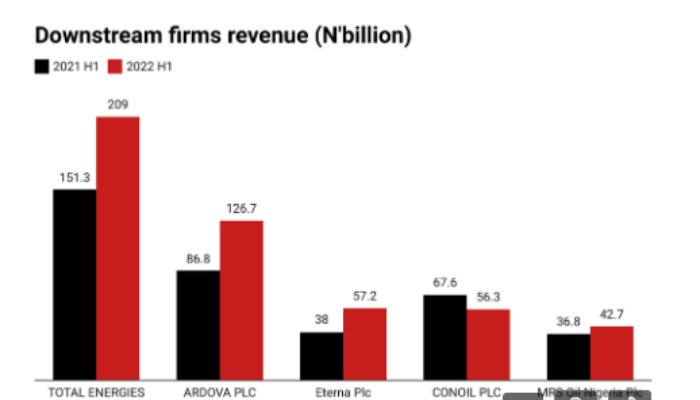 Despite flight shortages due to an acute shortage of aviation fuel, Nigeria’s biggest downstream firms are bracing the odds to post significant upticks in their aviation business as revenue increased by 72 percent in the first half of 2022,

Nigeria’s aviation business is currently facing an existential threat—triggered by an acute scarcity of foreign exchange (forex) and soaring cost of Aviation fuel (Jet-A1) price rising from merely N200 per litre about a year ago to close to N900 a litre present.

The financial statements of both companies listed on the Nigerian Exchange Group also showed both firms saw their combined aviation fuel profit increase by 16 percent from N 2.5 billion to N2.9 billion in the first half of 2022. 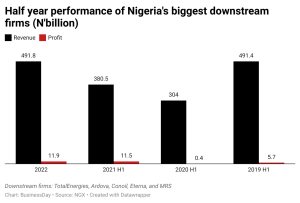 Aviation fuel accounted for N397.6 million of the firm’s total profit in the first half of 2022, a huge 127 percent increase from N175 million in the previous year.

For Total Energies, revenue from aviation fuel hits N25.1 billion in the first half of 2022, up 67 percent from N15 billion in the same period of the prior year.

Its profit attributable to aviation fuel however saw a decline of 7 percent from N2.6 billion in the half year 2021 to N2.4 billion same period 2022.

The aviation fuel crisis which began in late February and deteriorated further through the months of March to May has further worsened and is currently threatening the ability of airlines to continue operations with the price of JetA1 rising from N200 in December 2021 to over N400 per litre in February. Currently, the price has skyrocketed to over N800 per litre and sometimes more 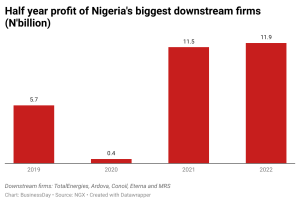 Green Africa, which started operations last year with Lagos-Abuja fares for as low as N18, 000 currently charges between N76,000 to N89,000 on the same route. The airline also charges between N72,000 to N88,000 for its Lagos-Port Harcourt flight.

United Nigeria Airlines have also raised fares from N28,000 in February to N80,000 for Lagos-Abuja and Lagos-Port Harcourt flights.

“We have noticed that airlines now operate below 60 aircraft percent load capacity since ticket prices increased. Some airlines that have a very discouraging number of travellers booked on their flights even transfer passengers to other airlines to help them airlift, just so they don’t operate at a loss,” a protocol officer at the Murtala Muhammed Airport terminal (MMA2) told BusinessDay.

The protocol officer who wanted to be anonymous said it appears most airlines are barely surviving and not making profit.

Average fuel consumption on a Lagos to Abuja flight takes nothing less than 8,000 liters depending on the aircraft. At N800/litre, airlines would be paying N6.4m for fuel alone, apart from taxes, staff payment, service charges etc; that is if the airline does not have to divert flight for weather or technical reasons.

If an airline load factor for a 200-passenger plane is 100 passengers, it means, at the rate of N80,000 per ticket, airlines will make N8million and spend N6.4 million only on aviation fuel. Airlines use the remaining N1.6 million to pay for other multiples charges from agencies, landing and parking costs, including five percent of ticket sales to the Nigeria Civil Aviation Authority, (NCAA) amongst others.

In June 2022, the Airline Operators of Nigeria, (AON) disclosed that three airlines may be shutting down in three weeks over the continuous rise in aviation fuel, which at the time sold for N714 per litre.

Allen Onyema, vice president of AON and the chairman of Air Peace said “If nothing is done concerning the cost of aviation fuel, the fuel crisis will take away three airlines in Nigeria in a few weeks.”

Also, the Nigeria Civil Aviation Authority suspended Dana because the airline was no longer in a position to meet its financial obligations and to conduct safe flight operations.