The Nigerian leasing industry has come of age as it continues to provide succor to many organizations across all sectors in the economy. The industry has achieved consistent double-digit growth rate over the years, buoyed by market opportunities, and lease awareness among corporates.

Analysis of the volume by sector in 2017 shows that the oil and gas took the lead with N449billion, representing 28percent of the total portfolio, while transportation followed with N355 billion, representing 20percent. Manufacturing moved to N217 billion from N180 billion in 2016, while Agriculture, Government, Telecommunications and other sectors (education, healthcare, construction, and consumer sectors) recorded considerable growth. 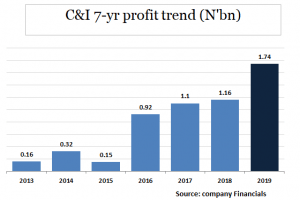 One company that has continued to play a prominent Nigeria’s leasing space is C & I leasing, incorporated in 1990 as a limited liability company, and licensed by the Central Bank of Nigeria to offer operating and finance leases and other ancillary services.

The company commenced full operations in 1991 and in 1997, C & I Leasing concluded a major restructuring and diversification project that saw its conversion to a public company with its shares listed on the official list of the Nation’s bourse as the only leasing and rental services company.

Leaseafric was incorporated in March 1992 and licensed by the Bank of Ghana as a nonbank financial institution. Aureos West Africa Fund bought into the company to take a 51.28percent stake and in August 2007. The Fund and Ecobank Ghana Limited, holding between them 59.05percent shares, sold their stakes to C&I Leasing Plc. Aureos West Africa Fund subsequently bought out other shareholders totaling 17.58percent which was subsequently sold to C&I Leasing Plc in March 2012. C&I Leasing currently holds 70.89percent equity stake in Leaseafric Ghana Limited.

United Arab Emirates (EPIC International FZE) incorporated as a free trade zone establishment in United Arab Emirates and licensed to trade in ships and boats, ships and boats spare parts, components, and automobiles and it commenced operations fully in 2014 with four vessels. The vessels are then chartered from C & I Leasing by the various international oil companies. This arrangement has expanded and helped grow the fleet size of C & I Leasing to 22 vessels currently. 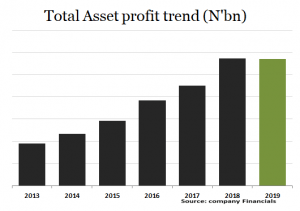 In 2018, C & I completed the buyout of 27.5percent minority stake in C & I Petrotech JV marine limited in the process, taking 100 percent ownership of six vessels deployed in a longterm contract with Shell Petroleum Development Company of Nigeria (SPDC). It also announced the acquisition of two brand new 2018 ‘ASD 2913 Tugboats’ named ‘MV Chidiebube’ and ‘MV Folashade’ with SIFAX Marine Limited under the SIFAX C&I MARINE LIMITED joint venture arrangement. The boats have since been deployed for a long-term contract with Nigerian Liquefied Natural Gas Company (NLNG).

According to the company, the purpose of the reconstruction is to allow the company to have enough unissued shares to accommodate future plans to raise capital through the equity capital market. The additional capital will be used to finance the company’s expansion plan, extinguish some liabilities and enhance the company’s capital mix.

The company’s Rights Issue of Five Hundred and Thirty-Nine Million, Three Thousand, Three Hundred and Thirty-Three (539,003,333) ordinary shares of Fifty Kobo  each at N6.00) was concluded in January and according to management, 58% of the proceeds would be used to refinance existing loans, 29.17percent for business expansion, 9percent in Investment in working capital.

In its recently released 2019 full-year result for the period ended 31 December, the company made N1.75bn in profit for 2019, an increase of nearly 50 percent year-on-year after gross earnings rose double digits in the year.

C&I leasing in the year under review saw a 34 percent surge in net lease income to N11.81bn, fuelled by about 46 percent jump in rental income which to N25.49bn, a growth faster than lease expenses which stood at N13.68bn in 2019.

Net outsourcing income for C&I leasing also rose 25 percent in the year on the back of stronger inflows while net tracking income declined by 14 percent owing to a faster rise in tracking expense while income dipped.

Finance cost increased year-on-year by almost a million to N5.65bn in 2019 and income from Join Venture fell to almost a quarter.

C&I Leasing noted an increase in expense items including impairment charges but was able to report an increase in its profit before tax by 31.8 percent to N1.86bn.

Shares of the company gained 9.48 percent to N6.35 a unit on Wednesday to emerge among NSE’s best-performing stocks in the day. On a year-to-date basis, C&I leasing has returned 7.63 percent to investors compared to 2.54 percent gains in the broad market.

No doubt the leasing industry has attracted investors from the financial and other sectors desiring to tap into the opportunities in leasing and as a means of hedging against other non-performing product offerings.

While finance lease remained the predominant type of leases accounting for 65percent of the transactions in 2017, operating lease continued to make a strong showing at 35percent.

In terms of transaction value, the banks still take the lead, particularly financing big-ticket leases, and providing funds to lessors for lease transactions. The non-bank lessors, however, accounted for about 80percent of customer base mainly from the Small and Medium Scale Enterprises (SMEs).

Looking ahead in 2020, the push by the government to generate more revenue would have a diverse effect on the industry in 2020. The increase in VAT to 7.5 percent from 5percent  will further make leasing transactions to be more expensive, especially in operating lease where it will apply to rentals in addition to the cost of assets. On the other hand, the industry may benefit from transactions falling within the scope of the expanded exemptions aimed at cushioning the effect of the increase in VAT.

According to ELAN projections, 20 new companies are expected to join the association in the coming year, bringing the total lessors in the country to 152.

How well players such as C & I Leasing would survive in the face of increasing competition and macro-economic challenges, only time would tell.