Burger King, an American multinational hamburger fast-food chain has opened its second outlet in Nigeria as it expands into the Nigerian market.

The global fast-food chain opened its doors for a soft launch to customers in Victoria Island Lagos on November 1, 2021 and has opened another outlet in Yaba, a suburb also located in Lagos.

Burger King announced its entry into Nigeria in the first quarter of 2021 attracted by Nigeria’s large and youthful population despite declining income.

The Nigerian market is an attractive market to international investors due to its young population of over 65 percent. However, with current economic realities and a tough business environment, many foreign companies like Mr Price and Woolworths have left the country. 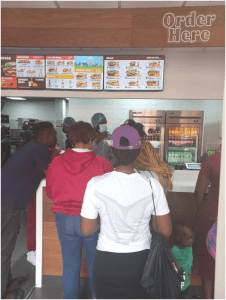 Others who have stayed are targeting the larger segment of the economy that is at the pyramid’s bottom, by packaging their products into smaller packs that are more affordable.

Antoine Zammarieh, group managing director, Allied Food and Confectionary Services Limited and franchisee of Burger King, in a statement said their goal is to positively contribute to the economy by creating more jobs and employment. He also mentioned that in five years, Burger King hopes to directly or indirectly employ between 5000 and 6000 people in Nigeria.

In the first two weeks of its launch in the restaurant location at 274, Ajose Adeogun, Victoria Island, the company recorded over 7000 orders with many Nigerians on long queues excited to get a bite of its iconic flame-grilled burgers. 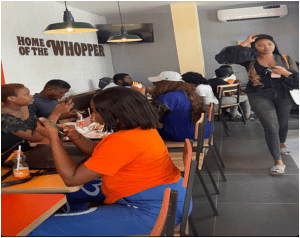 Unlike the first outlet launch with long queues as customers came in and got free burger meals of their choice from 11 am to 2 pm, there was no free meal this time and no long queues as at 3.30 pm.

However, the excitement was in the air as a good number of customers came in to get a taste of the whopper.

“I am happy to be here, I stay close to this place so I would be a regular customer here,” Chioma, one of the customers said.

Esther, another customer who came in to get a bite and was lucky to win one of the prizes for the day also mentioned that she was not disappointed with the taste of the burger. 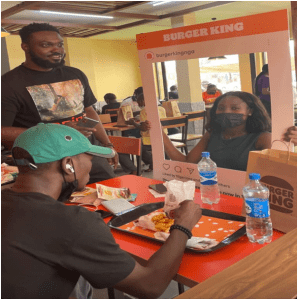 With over 18,000 outlets globally, Burger King is the world’s second-largest fast-food hamburger chain behind McDonald’s, the largest.

We must democratise real estate market and revolutionise housing finance’