At 11th AGM, Caverton plc looks into the future with renewed optimism amid pandemic impact 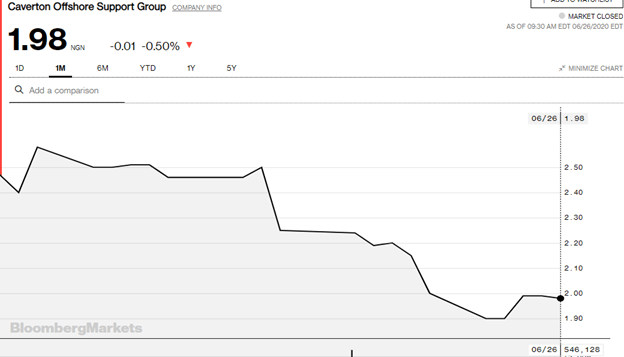 Companies across the globe are now adjusting their future earnings as the double whammy impact of novel covid-19 and plunging oil price continue to impact business operations. And for companies that provide offshore support services to oil and gas companies such as Caverton Offshore Support Plc, there is need to double down on all its business segments.

The company’s profit had taken a hit back in 2016 due to crash in oil prices which not only affected the oil companies but also, the Nigerian economy in general. Apparently, the decline in global oil prices led to lesser contracts for Caverton, as most of its clients struggled to survive the economic hardship necessitated by the ensuing economic contraction.

Caverton Offshore Support Plc is a marine and aviation logistics company which operates in Nigeria’s oil and gas sector. The company is estimated to have close to 80percent market share. Caverton was incorporated in 2008 and positioned for the acquisition of Caverton Marine Limited and Caverton Helicopters Limited, two previously existing logistics companies that were incorporated in 1999 and 2002 respectively.

Caverton became a group following the acquisitions. Also, the company is currently quoted on the Nigerian Stock Exchange. It is on a mission to fully take advantage of the Nigerian Government’s ‘Local Content Policy’.

As an aviation and maritime logistics company operating in Nigeria’s oil and gas sector, Caverton is focussed on providing transportation and environmental support services to its many clients. Specifically, the company provides emergency/medical evacuation services, maritime and coastal surveillance services, search and rescue operations, among others.

At the company’s 11th Annual General Meeting which was held virtually in Lagos, Olabode Makanjuola, CEO, Caverton Offshore Support Group, warned that the financial performance in the ongoing financial year ending December 31, 2020, would be greatly impacted by the Covid-19 pandemic, especially in the second half of the year. He was however confident that the group is well-positioned to continue to deliver good results in the years ahead.

“While seizing opportunities to build and grow our businesses, we aim to anchor our position as the trusted and preferred logistics solutions partner in the industry,” he said.

Increased its net profit by 14 percent from N3.8 billion to about N4.35 billion in the financial year ended December 31, 2019. in the review financial year also declared a dividend of 20kobo per share for shareholders out of its 128kobo Earnings per Share (EPS) portfolio.

Analysts say the decision of the firm to reduce its exposure to banks in terms of borrowing in the review financial year was commendable, especially as it continues to plow-back profit to fund its operations in the years ahead.

Speaking at the AGM, Aderemi Makanjuola, Chairman, Caverton Offshore Support Group plc, said despite headwinds faced, 2019 was indeed a good year for the company, noting that the performance reflected continued effective execution of the group’s bold strategy as it continues to innovate and break barriers to boost the bottom line in building a customer-centric group ready to generate sustainable long term value to its shareholders.

“The focused leadership, concerted effort of your agile and devoted workforce, and continuing support from our stakeholders enabled us to achieve this feat,” he said.

Specifically, he said, a new 7 years contract for the provision of five aircraft to support Shell Nigeria Exploration and Production Company and Shell Petroleum Development Company Limited was won after a successful bid.

“This award demonstrates the quality of character and tenacity of purpose of our management team and this laudable development also represents true commitment towards ensuring the seamless running of the nation’s oil and gas industry and by extension the Nigerian economy,” he said.

Another notable mileage achieved by Caverton in the 2019 financial year was the acquisition of Flight Simulator Training Device (FSTD) being the first in Nigeria and the African continent at large. The group said it aims to leverage on the increase of ‘AW139 Operators’ to create business value. The FSTD according to the Caverton group is a new aspect of its business that focuses on training. According to the Chairman, the new business segment will fall under the purview of the Caverton Helicopters Training Division.

The Thales Reality HFull Flight Simulator level “D” is one of the most advanced commercial helicopter simulator in the world. Pilots, who successfully complete the simulator training, often get certified to fly the AW139 under various Civil Aviation Authority (CAA) approvals.

The Thales flight simulator is expected to make it possible for Caverton to deliver various state of the art training to helicopter pilots. These training could range from Initial Type Rating, Recruitment Training, Proficiency Checks for Visual Flight Rules, and Instrument Flight Rules. The simulator also helps to train pilots on both offshore and onshore missions, VIP operations, and emergency landing.

The Rivers State Government’s action was based on the fact that Caverton Helicopters violated an initial executive order by Governor Nyesome Wike, which had prohibited the entry of vehicles and flights into the state starting from the 19th of March, 2020 in the wake coronavirus spread in the state.

Some caveats for Caverton

The company has already signed a major contract and upgraded its fleet in readiness for expansion and profitability in coming years. However, these are chiefly dependent on the impact of coronavirus on players in the oil & gas and stability in global oil price. Perhaps, a diversification away from oil price shocks.

Caverton must also keep an eye on its competitors such as Bristow Helicopters and OAS Helicopters for market share. Those two companies are understandably making their own expansion moves with hopes of taking more advantage of the market. More so, Caverton must also ensure to reduce its liabilities and operational costs down.