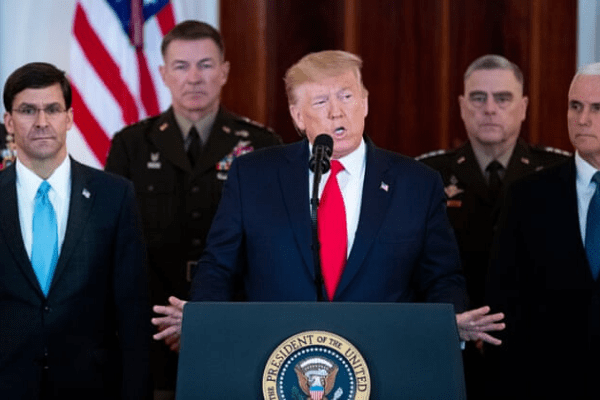 On January 3, 2020, the plane of Qasem Soleimani, major general of the Islamic Revolutionary Guard Corps (IRGC) and commander of its elite Quds Force, arrived at Baghdad International Airport. At the same time, the US MQ-9 Reaper, a prime assassination drone, was loitering in the area with other military aircraft.

At the Airport, Soleimani left with Abu Mahdi al-Muhandis, the deputy head of the Iran-backed Iraqi Popular Mobilization Forces. As they entered two vehicles, the convoy headed toward downtown Baghdad. At 1 am local time, the Reaper launched several missiles on Baghdad Airport Road. The two cars exploded in flames killing some 10 people, including Soleimani and al-Muhandis.

After the devastation, whatever was left of Soleimani could be identified only by his ring. Ironically, several perished Iranian and pro-Iranian commanders had been instrumental in the defeat of Islamic State.

Secretary of State Mike Pompeo said Washington had made an “intelligence-based assessment” that Soleimani was “actively planning in the region” to attack US interests. In turn, President Donald Trump declared Soleimani was behind “imminent attacks” on US diplomatic facilities and personnel across the Middle East.

None of these reasons, which stress attributed intentions rather than hard evidence, seem credible in the light of Iran’s efforts at multilateral diplomacy, its challenging economic conditions and the behind-the-façade attempt at de-escalation with Saudi Arabia. However, the mixed messages do reflect a longstanding US effort to justify “permanent war” in the Middle East and certain other hot spots. The House resolution to limit Trump’s war powers against Iran is a move in the right direction but it can neither reverse the past policy mistakes nor halt the current escalation.

In the subsequent TV address, Trump delivered his Orwellian soundbite. “We took action last night to stop a war… We did not take action to start a war.” And yet, several US planes were taking off from bases in the eastern United States toward the Middle East as Pentagon sent 3,500 members of the 82nd Airborne Division, one of the largest deployments in decades.

Amid mega rallies for Soleimani and Iraqi parliament calling for the expulsion of US troops from the country, Iran’s Supreme Leader Ali Khamenei spoke about the impending “retaliation.” Trump warned Tehran that any retaliation would result in US targeting 52 Iranian significant sites, including cultural sites. The allusion was to the number of American hostages during the Iran hostage crisis some 40 years ago.

Then came the bombshell. Two days after the assassination, Iraq’s Prime Minister Adil Abdul-Mahdi addressed his country’s parliament suggesting that Soleimani was on a peace mission. According to Abdul-Mahdi, he had planned to meet Soleimani on the morning the general was killed to discuss a diplomatic rapprochement that Iraq was brokering between Iran and Saudi Arabia. Abdul-Mahdi said Trump personally thanked him for the efforts creating the impression that Soleimani could safely travel to Baghdad, even as the White House was busy planning a hit.

Subsequently, Pompeo rushed to defend the assassination, again. “We know that [the report about Soleimani’s peace mission] wasn’t true,” he said. “We got it right.” Once again, he presented no hard evidence.

In reality, the US assassination appears to have been the latest effort to pre-empt de-escalation plans in the region, to reinforce Iran’s destabilization. It follows years of misguided covert operations. Here’s how it happened.

Only a few years ago, there was still great hope in Iran. After years of diplomacy, the comprehensive nuclear accord (JCPOA, July 2015) was achieved between Tehran and the so-called P5+1 nation; that is, the five permanent members of the UN Security Council – China, France, Russia, UK, and the US, plus Germany together with the European Union (EU). Under the deal, Iran agreed to eliminate its stockpile of medium-enriched uranium, while the International Atomic Energy Agency (IAEA) gained access to all Iranian nuclear facilities.

To Iran, the deal offered relief from US, UN and multilateral sanctions on energy, financial, shipping, automotive and other sectors. These primary sanctions were lifted after the International Atomic Energy Agency’s (IAEA) certification in January 2016 that Iran had complied with the agreement. Yet, secondary sanctions on firms remained in place, along with sanctions applying to US companies, including banks.

After the 2016 US election, the Congress with its Democratic majority – not president-elect Trump – paved the way for a U-turn. Following the House of Representatives, the Senate in late 2016 unanimously extended the Iran Sanctions Act (ISA) for a decade. Stunningly, the deal that President Obama had portrayed as his legacy in the region was shot down surprisingly fast. Intriguingly, most Democrats reversed their positions regarding the nuclear deal.

As Trump arrived in the White House, he began developing a far more muscular policy against Iran to benefit from Saudi economic and geopolitical support. In May 2017, Trump and Saudi Arabia’s then-king Salman bin Abdulaziz Al Saud signed a historic arms deal, which totalled $110 billion immediately and $350 billion over a decade. Widely perceived as a “counterbalance” against the Iranian influence in the region, it cemented the ties between Saudi Arabia and the US. However, Crown Prince Mohammed bin Salman’s reform efforts have been tarnished by harsh measures against members of his family and opposition, the Khashoggi murder and dismemberment, and the devastating war and famine in Yemen.

In return for the Saudi deal, the White House began a concerted push to counter Iran’s regional and strategic weapons programs, which had been excluded from the Iran deal. In May 2018, Trump signed National Security Presidential Memorandum 11, “ceasing U.S. participation in the [Iran nuclear deal]” and taking additional action to counter Iran’s “influence and deny Iran all paths to a nuclear weapon.”

That’s when the US effectively nullified a decade-long unified, multilateral approach to Iran’s activities, while setting in motion unilateral economic sanctions, which have affected not just U.S. businesses but targeted commerce from other major economies, particularly China, France, Russia, UK, Germany and the EU.

Even after Iran’s missile attacks against two bases of American troops, which seem to have purposefully shunned human targets, Trump promised further ratcheting up of economic sanctions against Iran. The use of sanctions is predicated on a purposeful effort to overthrow the Iranian government.

The path to grow Nigeria’s aviation

The war against Coro: Some small-small issues…$5.5bn loan? Count me OUT!

The war against Coro: Some small-small issues…$5.5bn…