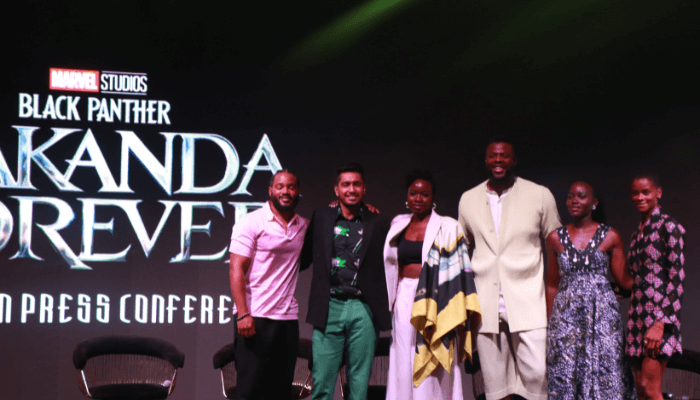 Disney and Marvel Studios made history as they premiered their most anticipated movie of 2022, Black Panther: Wakanda Forever in Lagos Nigeria on Sunday 6th of November 2022. Favourite Marvel characters have not felt this close to home as fans, movie lovers and local press got to see their black superhero’s up close.

Members of the press got to have a Q&A press conference session with the movie Director Ryan Coogler and his impressive main cast of Letitia Wright who played the Role of “Shuri” and is rumoured to dawn the suit of the next Black Panther after the passing away of Chadwick Boseman who played the role in the first film and other Marvel projects, Lupita Nyongo, Winston Duke, Danai Gurira, and Tenoch Huerta Mejia who is starring in his first Marvel film playing the role of “Namor”.

It was a lot of pressure but it was different. This time we were Navigating expectations cause they’d seen the first film. Moving forward we came together talking about the characters and the story and that’s how we navigate making the movie.

He said the cast and crew did a lot of community-building exercises, getting the old cast to make the new cast feel like they are part of the team by going to stunt practices together and creating a friendly environment. 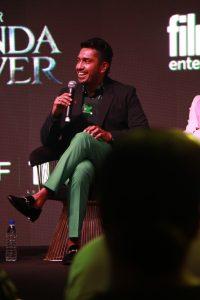 Mejia explaining his character said that Namor is a simple man trying to protect his family and cultural heritage which is important for him. He likened Namors character to real life concerns “ I think people all over the world can feel those concerns. That is why they are getting this strong attachment with Namor because they can identify with his experience,” Mejia said.

On him being a new character in the franchise he mentioned that the older cast members were welcoming and received the new cast with open arms “it’s easier to play like a child on set because you are protected and you can explore your character in deeper ways. The most important thing was the human empathy which was the best part,” 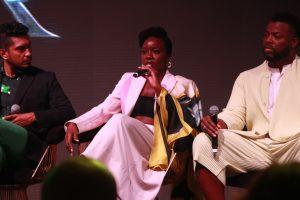 Gurira on the loss of Boseman and the impact to the whole cast and crew said “we lost our brother and our leader and had a very different focus in mind and when Ryan called and said we were doing the second film, he was very clear that this is the legacy that will honour our brother which made sense knowing the kind of spirit Chadwick had and how he would want this to continue.”

She mentioned that the movie brings a powerful journey of grief and loss but also with healing and hope adding that Wakanda reflected the African culture to the world and be seen in different part of the world and while people think Wakanda inspired Africa she tells them that Africa inspired Wakanda. 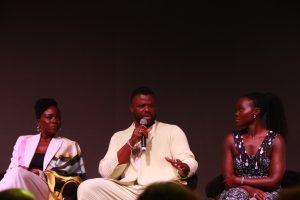 Duke said that the Black Panther project has given rise to the reflection of African culture taken seriously which according to him has been done in jest over the past decades in the global scene.

Touching on moving forward after the loss of Boseman he said “ I walked into this ready to have a new experience and Unfortunately, reality has set that stage for us that we couldn’t come close to having the same experience because of the loss of Chadwick and though we are hurt and confused as to why it happens

On working on the project, Duke says that the script has all the room for humour and Coogler leaves all the room for the cast to experiment which is counter intuitive and where everyone on set can be themselves and contribute to the betterment of the final process. 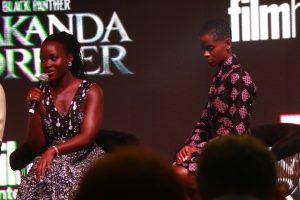 Nyong’o says that her character losing the love of her life has had an effect on her and all other characters but has matured and has different priorities. 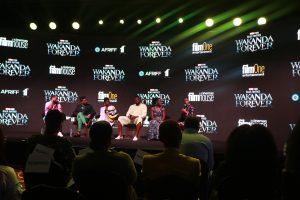 Wright gave an insight on how it felt like working without Boseman saying “ i didn’t know how to do this without my brother and was kind of stuck, after a discussion with Ryan i was impressed at his leadership, balance and how he expressed himself with clarity, vision and purpose.

Speaking on the impact of having Afrobeats artists on the movies’ soundtrack album he said, “ Music is very important to the medium, and was important in our first film as we were able to line up he likes of Kendrick Lamar and we wanted to do something different on this project and get more representation from Africa and Mesoamerica by getting artist from the continent.”

He said it made sense to have artists on the album that are in different places in their career breaking through both locally and to an international audience. He also cited the work ethic of Nigerians during his time in Lagos working on the album saying it was a fantastic experience and is proud of the outcome.