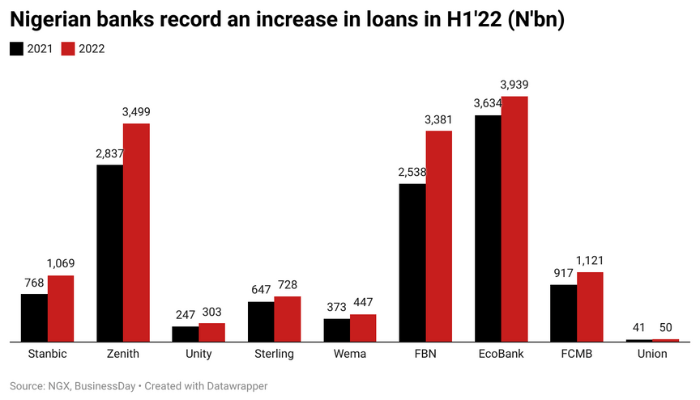 The interest income of Nigerian banks rose in the first half of 2022 after a much-needed boost from higher interest rates.

The analysis of the nine banks that have released their unaudited half-year financial reports shows that they generated N734.2 billion H1 2022 as interest income on loans, up 24 percent from N593.7 billion in the same period last year.

The Central Bank of Nigeria has raised the benchmark interest rate to 14 percent this year, a 250-basis-points increase from the 11.5 percent in May, in a bid to curtail spiralling inflation.

The interest rate hike helped banks to reprice their loans, and with expectations of another rate hike before the end of the year, the banks are likely to see the trend of rising interest income sustained.

“The increment in the banks’ interest income from loans can be attributed to both the banks’ loan book expansion and the interest rate hike,” Sodiq Safiriyu, investment research analyst at Meristem Securities Limited, said.

“Barring any drastic regulations from CBN that can change the course, I expect the trend in the loans and advances to continue for the rest of the year,” Safiriyu added.

Agusto & Co, a pan-African credit rating agency, said it anticipates a 16.5 percent year-on-year loan growth in 2022 as more banks have a better understanding of the macroeconomic headwinds.

“Traditional sectors such as oil and gas, manufacturing, general commerce, and agriculture sectors are expected to drive the loan growth given the backward integration initiatives of obligors, the intervention activities of the CBN, and the import-dependent nature of the Nigerian economy,” Agusto & Co said in its recently released 2022 Nigerian Banking Industry Report.

It said while the arbitrary cash reserve deductions and foreign exchange illiquidity would remain limitations to the growth of the industry’s loan portfolio, “we note that more banks are now favourably disposed to accessing the differentiated cash reserve requirement window to reduce the value of sterile restricted funds with the CBN.”

Tunde Ogunleye, an equity research analyst at Standard Bank Group Securities, is of the opinion that their loan book is likely to decrease.

“This is because in a higher interest rate environment, it is safer for banks to invest in government securities because of the returns as against lending to the private sector,” he said, noting that banks would increase lending rates as a response to the rising deposit rates.

“Also rates on deposits by customers are getting higher and to offset this expense, banks are expected to increase their lending rate which could discourage consumers from borrowing,” Ogunleye added.

According to him, banks have been unable to have enough liquidity due to the tightening controls such as the loan-to-deposit ratio policy and the arbitrary cash reserve ratio by the apex bank, amongst others, which are biting deep into their funds. This is expected to discourage these banks from expanding their loan books in the coming months, he said.

Stanbic IBTC reported N1.1 trillion as loans and advances to customers in H1 2022, representing an increase of 39 percent from N767.8 billion in H1 2021, while Zenith Bank’s loan book grew to N3.5 trillion from N2.8 trillion.