It is one thing to issue notification to customers about old and new transaction charges but another thing to implement same.

The Central Bank of Nigeria (CBN) on December 22, 2019, reviewed downward most charges and fees for banking services as contained in the new Guide to Charges by Banks, Other Financial, and Non-bank Financial Institutions, with effect from January 1, 2020.

Some of the major highlights of the new guide includes removal of card maintenance fee (CAMF) on all cards linked to current accounts, a maximum of one naira per mille for customer-induced debit transactions to third parties and transfers or lodgements to the customers’ account in other banks on current accounts only, reduction in the amount payable for cash withdrawals from other banks’ Automated Teller Machines (Remote-on-us), as well as from N65 to N35, after the third withdrawal within one  month.

Other reductions include Advance Payment Guarantee (APG) which is now pegged at maximum of one per cent (1 percent) of the APG value in the first year and 0.5 percent for subsequent years on contingent liabilities.

However, instead of complying indeed with the CBN’s directive, what the banks have done so far was to issue notification of compliance to their customers, whereas in practical terms they still maintain their old charges.

“I transferred N8,000 to First Bank on Monday morning (January 5, 2020) using my Access Bank mobile App and I was charged N52.50k from my current account”, a customer who works in Apapa, Lagos, and could not disclose her name told BusinessDay. 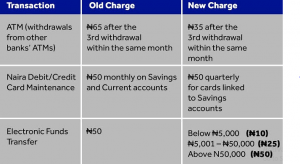 Uju Ogubunka, president, Bank Customers Association (BCAN), said if the banks are still using the guide to bank charges, they are overcharging customers and that shows disobedience the regulators.

“The earlier the banks begin to comply with the new directive on bank charges, the better for all of us”, Ogubunka told BusinessDay by phone call.

Part of the notification reads, “There will be changes to the charges applicable on some of the transactions you carry out on your account (s)”.

It was stated in the revised guide to bank charges that any breach of the provisions of the new guide carries a penalty of N 2,000,000 per infraction or as may be determined by the CBN from time to time.

“Failure to comply with CBN’s directive in respect of any infraction shall attract a further penalty of N2,000,000 daily until the directive is complied with or as may be determined by the CBN from time to time,” the CBN said in the guide.

Another bank that has issued notification to their customers is Fidelity Bank Plc. Its notification reads: “In line with the Central Bank of Nigeria’s (CBN) directive to implement provisions in the Revised Guide to Bank Charges (RGBC), we wish to inform you about the reduction in charges for the following transactions effective January 01, 2020”.

Also, First Bank stated: “Following CBN’s revised Guide to Charges by Banks, Other Financial and Non-Bank Financial Institutions, charges on our electronic banking channels have been reviewed downwards and would take effect from 1 January 2020. You can now carry out more transactions at reduced charges”.

Ecobank Nigeria said it has complied with the Central Bank of Nigeria’s recent directive on the reduction of bank charges. The bank commended the CBN for taking bold steps to further strengthen the financial inclusion drive in the country. It will be recalled that in October 2019, Ecobank announced the elimination of session charges on its USSD platform – *326#, months prior to the new CBN directive.  Customers using *326# for their transactions such as inter and intra bank funds transfers, bill payments, airtime top-up, and balance enquiry, among others, can do so at zero session fees.

Further to the removal of the session charges, Patrick Akinwuntan, managing director, Ecobank Nigeria, advocated stakeholder buy-in to make banking more affordable and accessible to all.  He noted that lower charges would encourage the unbanked to adopt structured financial services, thereby driving financial inclusion and economic growth. Ecobank has been at the forefront of the campaign for inclusive, affordable banking. Anyone, regardless of their social class, can open the Ecobank Xpress Account with zero naira, from any phone type, simply by dialing *326#. The account opening process is fully “do it yourself” without any documentation or paperwork.

Coronavirus: GTBank says services will not be interrupted

Coronavirus: GTBank says services will not be interrupted