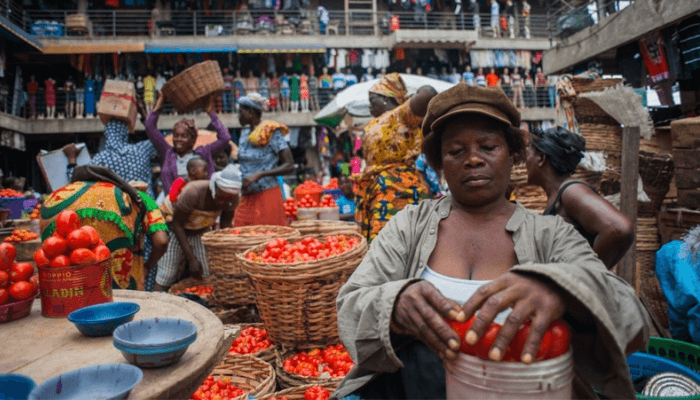 As the festive season draws near, Nigerian farmers have raised concerns over an impending food shortage and heightened prices as insecurity and floods hamper production.

Data from the National Bureau of Statistics indicate that Nigeria’s food inflation quickened for the seventh straight month to 23.34 percent in September 2022 from 23.12 percent in the previous month. The figure was the highest reading since October 2005, partly due to supply disruptions caused by recent widespread flooding and as a weaker naira continued to boost costs of imported food.

BusinessDay findings showed that a 50kg bag of locally produced rice, which previously was sold for between N15,000 and N20,000 in Abuja, is now sold for over N35,000 while the price of a bag of foreign rice hovers around N40,000.

A beans trader in Mararaba market who identified himself simply as Jonathan told BusinessDay that a bag of beans, which was previously sold for N27,000, sells at N30,000 while 20 litres of palm oil that was sold for N10,000 now goes for N25,000.

Commenting on the food prices, Mary Afan, president of Small Scale Women Farmers Association in Nigeria, said there is no succour in sight, as farmers recount losses from flood incidents in some parts of the country.

According to Afan, rice paddy that was sold to farmers at N16,000 during harvest season in 2021 is now being sold for N25,000, “and we see this increased price in almost all our farm inputs.”

“We are not expecting to see food prices come down now; the increased prices may even get to next year. Last year, the cost of food was not really good but it has become worse as we are currently faced with the impact of floods in most states,” she told BusinessDay.

“The flood destroyed many farmlands, and for some of us that even have crops to harvest at this time, we are not able to harvest as much as we planted because the flood washed our crops away. Also, most of us are still scared to go to our farms due to insecurity.”

She said unless a deliberate effort is made by the government to manage the current situation, Nigerians may pay more for food in coming months.

Olam Nigeria Limited, an agri-business company, had earlier said that it lost over $15 million worth of planted crops as flood submerged 4,500 hectares of rice farm land in Nasarawa State.

Counting the losses, the vice president of Olam Rice Farm, Anil Nair, said the losses are huge but can only be estimated once the water recedes as other damages, including infrastructure such as dykes, canals and drainage worth $8 million, were equally recorded.

Janet Adejo, a Benue state farmer and coordinator of Middle Belt small-scale farmers network, told BusinessDay that rice farms, cassava, tomatoes, vegetables and yam farmers including livestock breeders have all been affected by the floods.

She said: “Now we are supposed to be harvesting our produce but they are all rotten. The flood has washed away many of our produce, our rice farms, and even our cassava are now rotten. It is not only the flood that is affecting the cost of food, transportation now takes a lot of monies from farmers, we have bad roads.

“Currently in Benue State, 10 tubers of yam that we used to buy at N2,000 is being sold for N3,500. Even our vegetables, tomatoes and okra were all washed by the flood. And this will certainly affect the price of food in the coming months.”

But Mahmood Abubakar, minister of agriculture and rural development, blamed the increase in food prices on many factors including the COVID-19 pandemic, insecurity and the Russia-Ukraine war.

He said: “When COVID came, it affected a lot of things including food production and the after effect of that is what we are still facing and that will lag for some time before it is stabilized.

“The whole world is currently reeling out of COVID and now battling the consequences of the war in Ukraine and Russia but things will stabilise and the ministry of agriculture is doing everything possible in terms of addressing the problem; we are not relenting, so that the prices will come down faster.”

The minister said that insecurity across Nigeria has affected food prices, as the attacks by herders and terrorists have denied some farmers the opportunity to go to their farms, especially in the north-west and north-central regions of the country.

He said the government was working hard to address the rising prices of food items.