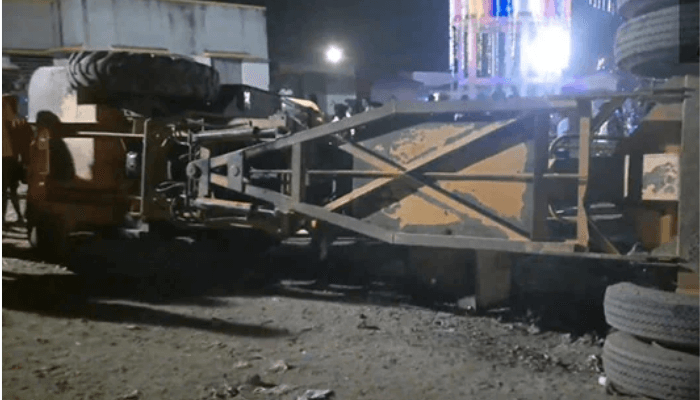 Four people were killed and at least six others injured after a crane crashed during a temple festival in the southern Indian state of Tamil Nadu, officials said Monday.

The crane collapsed Sunday night at Draupathi temple in Ranipet district, 85 kilometers west of Chennai, the capital city of Tamil Nadu.
Reports said around eight people were on the crane to receive garlands from the devotees when the accident took place.

“Last night a crane meant to carry the idols and accept flower garlands from devotees at Draupathi temple collapsed abruptly, killing three people on spot and injuring many others,” a police official said.

“Of the injured one more succumbed to his injuries this morning at the hospital, taking the toll to four.”
Local media reports said around 1,500 people were present at the spot.

A video of the accident posted on social media showed the crane with people hanging on to it, crashing down to the ground and devotees screaming and running away in panic.

Following the collapse, some of the onlookers were seen rushing to help the injured and shift them to the hospital.

Police had registered a case and ordered an investigation into the accident.

The driver of the crane had been detained, police said.

“A part of the crane was on higher ground. This soil imbalance appears to have caused the crane to topple.